The original Texas Chainsaw Massacre might be one of the greatest horror films ever made, in this humble writer’s opinion at least. A master class example of macabre mixed with a true feeling of realism and terror that I’ve hardly seen matched today. A visual representation of fear itself.

So it may seem strange then, when Tobe Hooper came out of the gate with his Texas Chainsaw sequel – simply named The Texas Chainsaw Massacre Part 2. The tense darkness of the original was quickly replaced with an over-the-top plot (and budget) along with an immense dose of black comedy. Gone was the realism. Instead what we got was some strange fantasy acid trip.

This probably let down a lot of people who were hardcore fans of the original – but it definitely didn’t let this writer down. Actually, I’d consider this to be one of the greatest horror sequels of all time. Not because it honored what made the first one so great. Actually, it’s because of the exact opposite. The Texas Chainsaw Massacre Part 2 does everything wrong. It represents everything a hardcore fan would not want to see in the sequel – but it does so with such gusto, such creativity, and such self awareness that it becomes an entertaining beast on its own.

Let’s count the ways of the fundamental “wrongs” that feel so write in this movie:

#1. Leatherface on the Move

A large part of what made the first film so scary (and it’s something that later versions understood) is that the victims are trapped in Leatherface’s lair. These soon to be bloodied teens are lost, alone, and trapped by a plethora of insane family members. There is no safety. There is no one “normal.”

Yet the sequel takes Leatherface on the road, into the real world if you will. For example, this is how we see him kill someone for the first time: A truck pulls up, Leatherface jumps out the back, and he starts hacking up drunken teens. Basically, he’s suddenly a hit and run killer – eventually going further into a radio station and buzzing the shit out of everything. We are no longer in Leatherface’s realm – he has entered ours. And he comes in like a cannonball. Chaos ensues and it’s all just totally random. But it’s that very unhinged chaos that is so delightful. It’s like putting a kid in a candy shop – Hooper throws all the fun destruction on the screen at once. 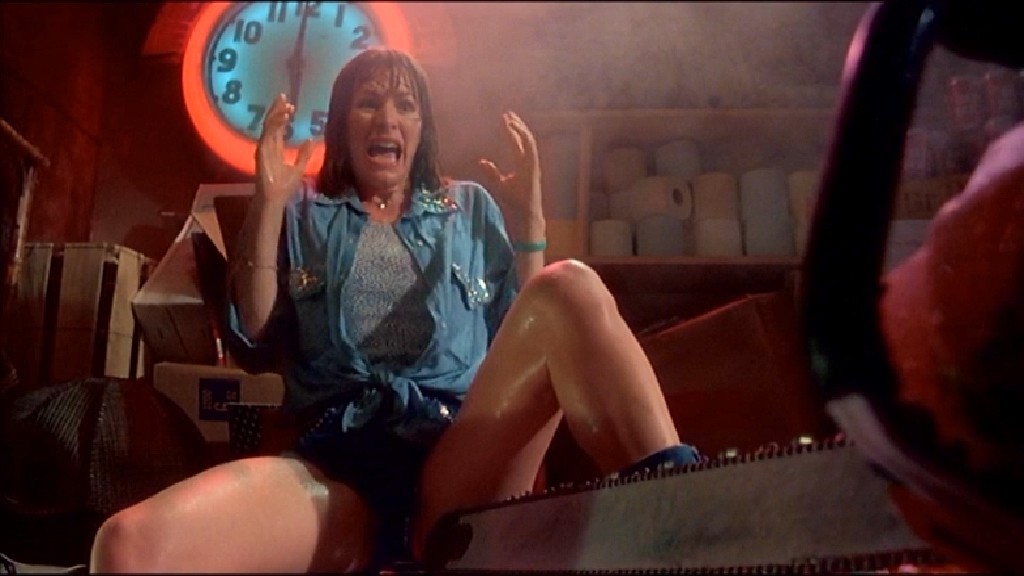 I’m willing to accept that this sequel wouldn’t be anywhere near as good if they didn’t enlist the talent of the amazing Dennis Hopper. This guy is one of the masters of playing it cool and playing it crazy at the same time. I couldn’t think of a better adversary for Leatherface than Hopper.

The funny thing is, the last thing you need in a Texas Chainsaw Massacre movie is an arch nemesis. No one wants to see Leatherface fight (Chainsaw duel!). They want to see Leatherface terrorize and kill. But man, Hopper truly kills it in this role. I mean, I would watch any movie where Hopper goes shopping for chainsaws, buys three of them, and then goes on a revenge buzz cutting spree.

But then again, that’s what makes this movie so fantastic. It’s the only movie that even thought to do that.

Yes, I mentioned it briefly above. But this deserves its own category. Look, if you think that taking a classic like The Texas Chainsaw Massacre and adding a one on one chainsaw duel is a good idea – you’d usually be wrong. But if you are Toby Hooper, somehow, some way, you get pure and utter brilliance. I’m getting excited just thinking about it. This is the Luke and Darth Vader of fight scenes in the horror world – and to me the only thing better than lightsabers are chainsaws. Don’t take my word for it. Check it out below.

Oh man, there’s so many other little things I can talk about – but I won’t take away too much of your time. I just want us all to take a moment and reflect at how rare of a film this is. A sequel that breaks all the rules and makes all the wrong choices – but it feels oh-so-right.