When John Boorman’s Deliverance was released in 1972, it was an immediate classic. And for good reason, because it’s goddamn amazing.

Of course, not everyone liked it. Roger Ebert called it “exploitative sensationalism”. I guess even Ebert can’t always get it right.

The thing is, Deliverance is actually adventure-horror. Usually, you’ll see it called a “thriller”, because it’s hard to categorize and nobody understands what “thriller” means, anyway.

The plot is about four Atlantan businessmen who take a canoeing trip in the rural South before the river is dammed and flooded. Lewis (Burt Reynolds) is a macho, outdoors survivalist type. Ed (Jon Voight) is also experienced with the outdoors, but doesn’t buy into Lewis’ “survival of the fittest” philosophy. Drew (Ronny Cox), plays the guitar, and is more of a sensitive type, while Bobby (Ned Beatty) is crude.

Side note: these were Cox and Beatty’s film debuts. Beatty in particular had a very long career after this, and all because the studio wanted to save money on casting.

None of the men, not even Lewis, realize what they’re getting into. Before they set off down the river, they stop at an isolated gas station run by hillbillies. In an iconic scene, Drew starts a back-and-forth with his guitar and a kid with his banjo, riffing on Yankee Doodle. Drew sees the humanity in these people and tries to relate to the kid, but once the song is over, the kid ignores him. 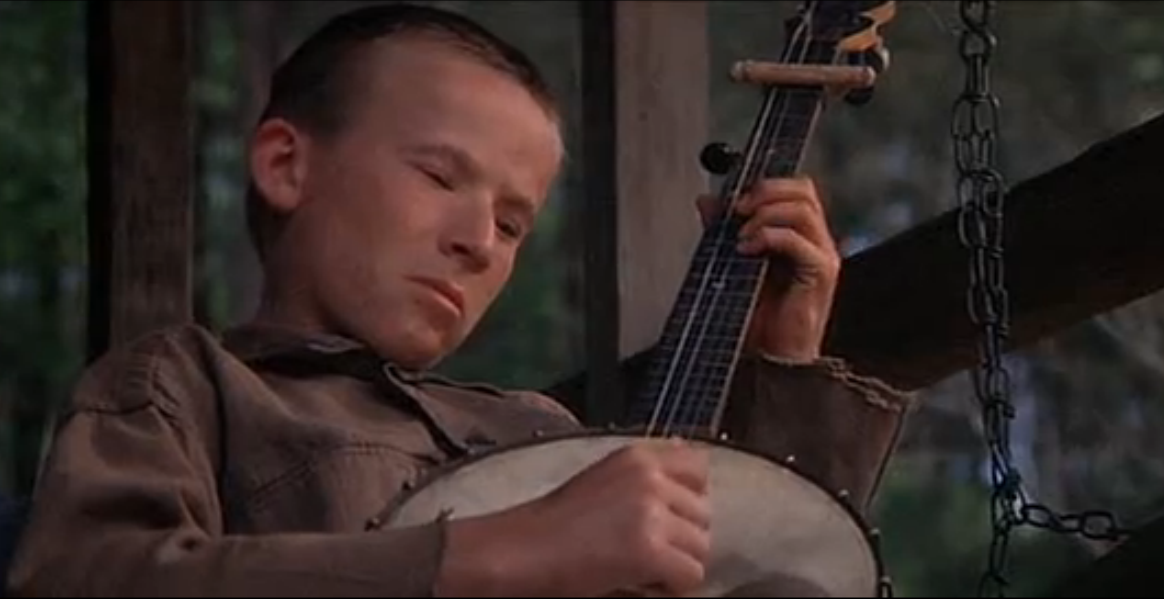 It’s all fun and games for now, but as the gas station attendant says when Bobby tells him he likes the way he wears his hat, “You don’t know nothin’.”

When they finally set off on the canoeing trip, things quickly go very wrong, and each of the men is tested, or punished, in a way that’s uniquely painful to them. In the other iconic scene, Bobby is raped at gunpoint. Lewis kills the rapist with a bow and arrow, and convinces the others to bury the body instead of going to the police because he doesn’t think they’d get a fair trial. Going along with this literally destroys Drew – when they set off down the river again, he dives into the rapids without a life jacket and drowns. Lewis breaks his femur, rendering him useless and forcing Ed to take the lead. This is not a pleasant task when the dead rapist’s friend starts hunting them down with a gun. Ed is eventually forced to kill the man hunting them with Lewis’ bow and arrow.

Once they get safely back to town, they lie to the Sheriff about what happened to cover themselves. The Sheriff is suspicious, but has no evidence of wrongdoing, so he lets them off with a warning not to come back. Lewis is brought to a hospital. When Bobby and Ed say goodbye, Bobby says, “I don’t think I’ll see you for a while.”

So why is Deliverance such a great horror movie? There are no monsters, no undead. The horror is in the aftermath of the experience, in what it does to the survivors. Extreme danger compromises the men, forcing them to do things they never imagined they would. And in the end, when you get past the blood and guts, isn’t that what horror is really about?

In the very last scene, Ed dreams of a hand rising from under the surface. He wakes up with a jolt, and his wife comforts him. Ending that way implies that Ed hasn’t really escaped from his trauma. He’ll continue to be haunted by it, probably for the rest of his life.

I guess that means the undead make an appearance, after all.