This morning when I woke up the first thing I said to my wife was, “Is today the first day of Spring?” (even though the forecast says snow once again here in NYC).  She replied, “Yes.”  In that moment I realized that these two guys Justin Benson and Aaron Moorhead are pretty clever.  I’ve been waiting for a chance to check out this movie for a while and for some reason it’s even more exciting now that I associated today with the movie.

I think this is pretty standard now, but a lot of times after I see a movie that I enjoy, I’ll follow the director on instagram or twitter to keep up with what they are working on next.  So after V/H/S Viral I decided to follow the lovable directors of Spring, Justin Benson and Aaron Moorhead.  What I’ve noticed leading up to the release of this film is that these guys are some of the hardest working filmmakers out there.  I mean they literally used the first day of the spring season to remind me that there movie is coming out today!  Aside from being indie marketing gurus they write, shoot, edit and do visual effects for their films.

So here’s a quick recap of the grassroots marketing work the directing duo has done so far:

They took it upon themselves to begin writing editorial articles for a few of the bigger trades.  I have to assume our site is too new and hip so they didn’t get around to giving us a call – maybe next time.

For IndieWIRE they wrote “Attention Filmmakers: Here’s the 12-Step Guide to Co-Directing”

For Bloody Disgusting they wrote “The 10 Most Fucked Up Romances”

Maybe there’s even some articles I’m missing…  Along with all of their editorial hustling they’ve also been doing some of the tough marketing work themselves.  I happened to see “James Franco” calling TMZ to report that Spring is the best movie he’s seen this year.  You can see the same footage if you check out Aaron Moorhead’s Instagram account.

They’ve also been standing on the street corner holding a sign that says SPRING. 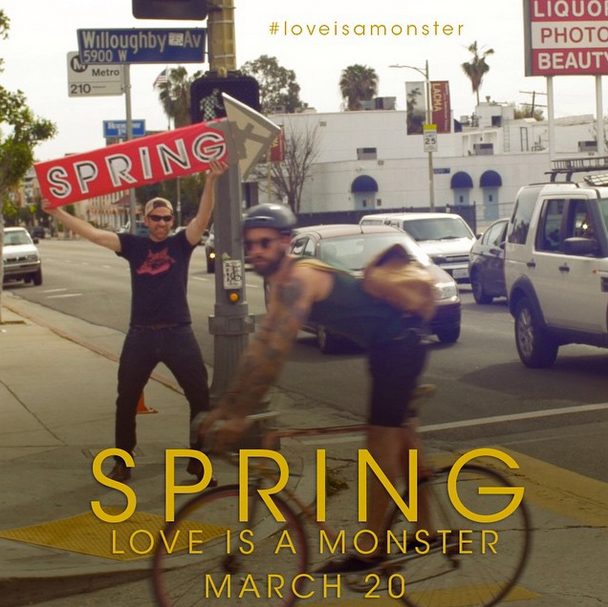 These are just a couple of hard working guys who want you to see their movie.  Guess what guys?  All of your hard work paid off.  At least for me it did, and I’ll definitely be checking out Spring later tonight.

Find out if Spring is playing in a theater near you right here: http://drafthousefilms.com/film/spring otherwise check it out on VOD.