Is a new twist on the “found footage” genre enough?

It’s not hard to see why found footage horror films are popular. They’re made with small budgets, offer some fun logistical challenges for filmmakers and the shaky camerawork can be inherently unsettling. But in the 16 years since the seminal found footage hit The Blair Witch Project, filmmakers are finding it harder and harder to make the format feel fresh again. Writer-directors Scott Beck and Bryan Woods, in their supernatural horror film Nightlight, have taken the found footage style but took out the “found footage” part. We’re not seeing the perspective of a camera but a flashlight.

Teens Robin (Shelby Young), Ben (Mitch Hewer), Nia (Chloe Bridges), Chris (Carter Jenkins) and Amelia (Taylor Murphy) go into a mysterious forest, infamous for being a spot where people go to commit suicide. At first, they play games like chicken with an incoming train and truth or dare. But once Chris tells the story of the forest and ghosts that live in it, the teens realize that maybe there is something supernatural about this forest.

The use of the flashlight as the point of view for the entire movie is an original way of getting the odd angles, the shakiness and the long shots without the question of why people continue to film when their lives are being threatened. And because the whole movie takes place at night, the primary source of lighting is the flashlight. The look of the film is startling because of what you can’t see. Beck and Woods milk their minimalist approach to cinematography and sound design. The viewers have to scan the screen for ghosts or whatever and strain their ears for a noise, any noise, either friendly or sinister. 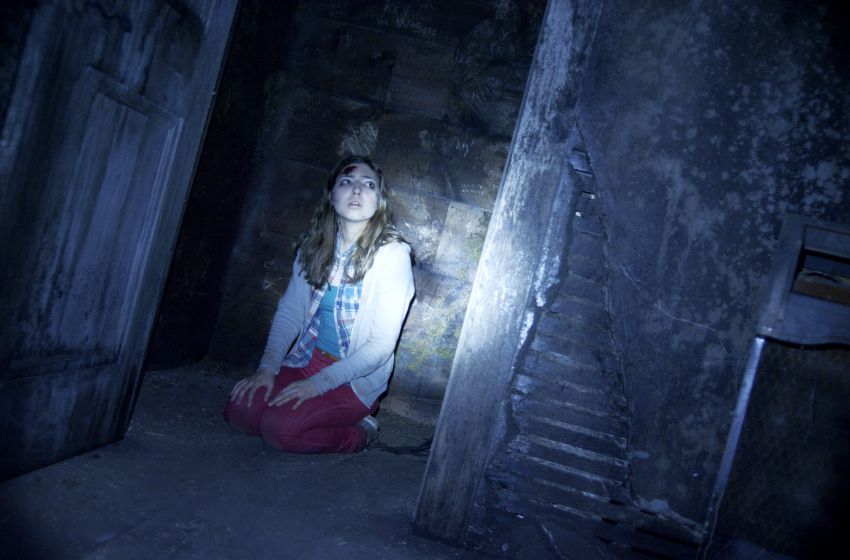 A solid visual flair, however, can only take you so far. Where Nightlight fails is in its story and characterization. Even at 85 minutes, the film starts to get tedious during a portion of the movie where the characters are running through the forest, asking no one in particular what is going on. The movie picks up every now with a solidly scary sequence but then settles back into the routine.

The other major issue is that everything that happens is telegraphed by Chris, when he tells the legend of the forest. By having a character tell the audience what is about to occur the suspense is lost. Chris warns the group of the danger of doing certain acts and sure enough, everyone does what he says not to do. This isn’t a major crime but when the characters continue to act dumb, it gets pretty frustrating.

The characters are also thin. The five characters fit the basic archetypes you’ve seen before in movies like this: Robin the good girl, Ben the dream guy, Chris the jock, Nia the mean girl and Amelia the popular girl. While the characters’ fates don’t play out exactly as expected, some deeper insight into who these kids are outside of their boxes would have been appreciated. Robin is fleshed out a little due to her friendship with suicide victim Ethan. But I still felt a little detached from Robin, partly because she spends so much time offscreen (she holds the main flashlight).

The movie attempts to make a somewhat profound statement about suicide and loneliness but ultimately it bites off more than it can chew. Because of the way the movie plays out and how Robin’s character arc culminates, the film undermines its own point. It’s admirable that Beck and Woods want to take a more serious approach but it just didn’t work as well as they probably intended.

The acting in this movie is fine. No one really stands out. The initial scenes aren’t as grating as they could be because the kids have a nice chemistry. But the performances don’t really extend beyond what is expected. They are put through the ringer in this movie and so the actors bring a committed physicality to their performances.

Is Nightlight scary? Yes, on an immediate visceral level. Unfortunately, the movie does not really have much lasting power. The brisk running time is a major plus but this is not the kind of movie that’s going to become a modern horror classic. Nightlight is watchable but it is still somewhat forgettable.

Should You Go Into the Woods with 'Nightlight?'
Even with a unique visual style and some solid scares, Nightlight fails to leave a mark.
Rating4.5
Pros
Cons
4.5Overall Score
Reader Rating: (1 Vote)
83%