Are you a good person?

Ex Machina, the directorial debut from writer Alex Garland (Sunshine), is a film based on these questions. The film is sci-fi, and it sits comfortably between fantastical and hard sci-fi. The film also has elements of body horror and retains an uneasy vibe of dread. Starring three actors with cool names, Oscar Isaac (Inside Llewelyn Davis), Alicia Vikander (A Royal Affair) and Domhnall Gleeson (About Time), Ex Machina is atmospheric, handsome and quite unsettling.

An employee of a search engine company, Caleb (Gleeson) wins a lottery to spend a week at the vast estate of the company’s owner Nathan (Isaac). He is flown in by helicopter to an island with a semi subterranean mansion. Nathan informs him that the location isn’t just a house but a research facility and gets Caleb to sign a non-disclosure agreement. Then the true purpose for Caleb’s visit is revealed: Nathan has built an A.I. named Ava (Vikander). He wants Caleb to conduct the Turing test on her, in order to see if she is truly artificially intelligent. 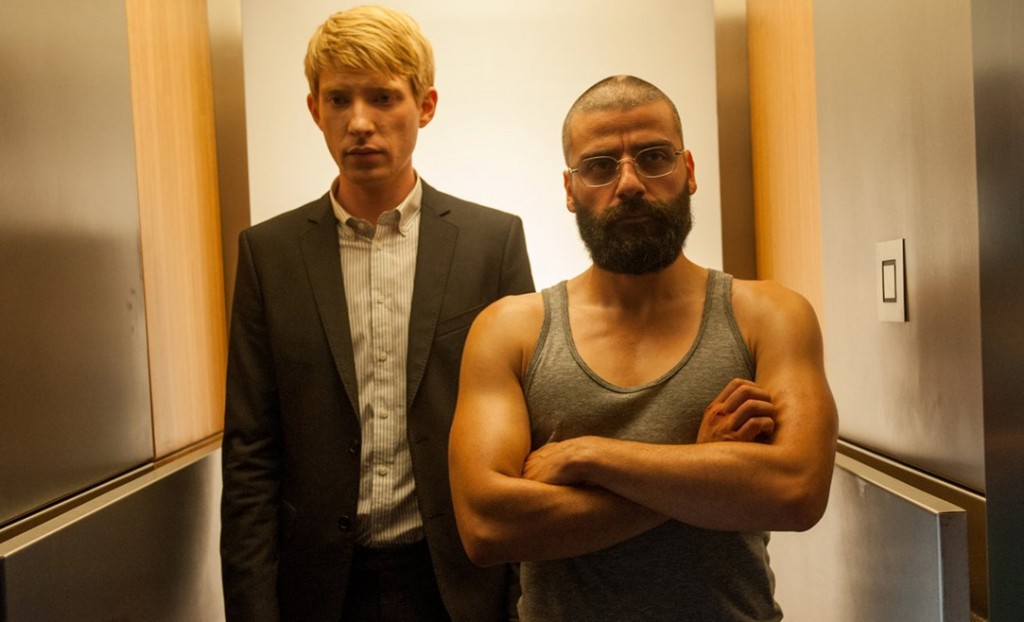 Alex Garland has made a career out of writing scripts with lofty sci-fi aspirations. While his previous films aren’t always successful at their conclusions, he should be commended for taking a more cerebral and grounded approach to science fiction. What I like about his scripts–and this is especially true for Ex Machina–is that the sci-fi doesn’t require loads of special effects. Much like Spike Jonze’s Her, the near-future setting makes everything more convincing and authentic.

While the film does not delve into outright horror (probably Garland trying to avoid the pitfalls of Sunshine), the film has a very horrific atmosphere. Cinematographer Rob Hardy creates clinical, precise shots. The use of glass, mirrors and reflections keep everything at a distance. Caleb is often dwarfed on the screen by the mountains and trees outside and the walls and doors inside. Camera angles and framing keep Caleb low and to the side. At first it was just to show that he’s out of his element but as the film reveals itself, his place in the frame hits a deeper level.  Garland’s script has a gradual pace, which allows for the film’s visual style to sink in.

Ex Machina also make a point about gender and sexuality. Like with all great sci-fi, the film works on a metaphorical level. The dynamic of the two human males and the female robot conforms to the status quo of keeping women in a passive, objectified state (like 90% of stories). At first I was afraid that Garland would just indulge in the dynamic without comment but Ava’s place in the story raises uncomfortable questions about how women are viewed on the screen. Ex Machina plays to expected gender roles and has its male characters want to play those roles. Caleb and Nathan want to place Ava in a certain role but she resists, becoming self-actualized. At the risk of spoiling anything, let’s just say that a certain David Fincher movie came to mind while I watched this movie.

Ex Machina boasts of a score by Geoff Barrow and Ben Salisbury, and the music adds to the eerie, jittery tone. The production design, costumes, and set decoration are near perfect for the style that Garland is going for. If I have a complaint about Ex Machina is that its vagueness sometimes goes from tantalizing to alienating. This might be a hard movie to recommend because it might be too distant and not visceral enough for some audiences.

The cast is uniformly excellent. Oscar Isaac is quickly becoming a major star; he is nuanced and specific in this role. His line readings, body language and sheer towering presence make Nathan fully realized and unpredictable. Domhnall Gleeson feels overcome by his surroundings; his character and what his role in the story are at odds with each other and it makes for an interesting lead performance. Alicia Vikander, about to have her breakout in this summer’s The Man from U.N.C.L.E., is superb. Her curiosity and sadness make Ava a stronger character than she seems at first glance. I think Vikander had a really difficult role but she pulls it off.

Ex Machina is a beautiful, creepy sci-fi film with lofty questions and terrific acting. After the movie ended and the credits rolled, I was just so pumped by it. It’s a movie that will probably require a few viewings. Once for the plot, twice for the atmosphere. Essentially a chamber drama with few characters, it’s the kind of brainy, low-key sci-fi story that will push the genre forward.