Sharknado 1 and 2. Sharktopus. Ghost Shark. Mega Shark vs. Giant Octopus. Two things these movies have in common beyond sharks? They’re SyFy originals, and they suck.

Not the good kind of suck, either. Movies that are so bad they’re good are real, and they exist, but these movies are not that. No one in the process of making these movies thought they’d be good; in fact, they’re designed from the outset to be bad.

The difference between “So Bad It’s Good” and “Intentionally Bad”.

We all enjoy the likes of Birdemic, Troll 2, and The Room. But the thing is, these movies are sincere attempts to create a work of art. Sure, they fail miserably, but the filmmakers pour their love and care into these movies. They try, and that makes them endearing. We may laugh at their failure, but they desperately want to entertain us. You can’t hold their failure against them. 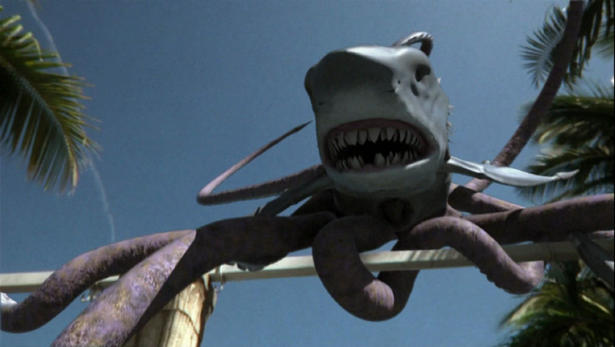 Contrast that with how The Asylum works. Forget love and care: these “zero-budget” movies are shot in 12 days, complete in a month, and “premiere” two months after the concept is created. They come up with a title and poster first, then slap on a script pretty much as an afterthought. And it works because the titles are ridiculous and attention grabbing. But then you watch the and realize all the good parts were in the trailer – the rest is pure, boring garbage. They target certain age groups, certain demographics, certain audiences. They’re designed to make you say, “a vortex of sharks? I have to see this glorious trainwreck!”

If both kinds of movies are trainwrecks, the first, “so bad it’s good” kind is a real one, with real people with real lives that are actually getting hurt, and the other is staged. The tracks never went anywhere but off the cliff. No one is on board, and the people staging it are charging you for your voyeurism and laughing all the way to the bank. And sure, the explosion might still be cool-looking, but it’s just not the same. The number of trainwrecks you can watch before the spectacle and explosions gets boring.

Look, storytelling is hard. Filmmaking is hard. I get that – I think most people do. That’s why it’s so easy to forgive the honest failures out there. They get a gold star for trying.

But intentionally bad movies are not trying. They are a safe corporate strategy that make a mockery not only of film as an art form, but of us as an audience. They’re basically 90 minutes each of a studio saying, “We don’t have to try, because we know you’ll eat this shit and enjoy it.”

And that’s why they are a scourge that must be stopped.