A question of identity.

Brian De Palma is known for the original Carrie and Scarface, but one of his earliest films, Sisters, mixes social commentary with an obvious homage to Alfred Hitchcock, mixing elements of Psycho and The Rear Window as well as emulating Hitchcock’s direction and editing style. Bernard Hermann even scored the film, especially underlining the connection to Psycho.

The film opens on a game show called “Peeping Tom”, where a model from Quebec named Danielle (Margot Kidder) poses as blind and starts to undress in front of a black man, Philip (Lisle Wilson), an unknowing contestant (setting up a recurring voyeurism motif). Philip decides not to watch and thus loses the game. As a consolation prize, he’s given a dinner for two at a restaurant called “The African Room”, while Danielle is given a box of cutlery. The two go on a date at said restaurant, where they’re briefly interrupted by Danielle’s stalker ex-husband Emile, and then Philip takes a drunk Danielle back to her place in Staten Island. In the morning, Philip hides in the bathroom while Danielle argues with her twin sister Dominque, off screen. Then she sends him for pills that she’s run out of. When he gets back, Dominique murders him.

Just as with Psycho, the narrative shifts here to a reporter, Grace Collier (Jennifer Salt), who witnesses the murder from her window. She reports it to the police, but the detectives who arrive are skeptical, and more interested in berating Grace for stories she wrote that were critical of police brutality. As the police delay visiting Danielle, she and Emile cover up the crime. This is where we get the most interesting sequence. As we watch Grace argue with the police, the screen splits to the simultaneous covering up, providing an ironic contrast between the two. By the time the two groups join up, the body is hidden inside the couch. The police find nothing and declare the case closed. 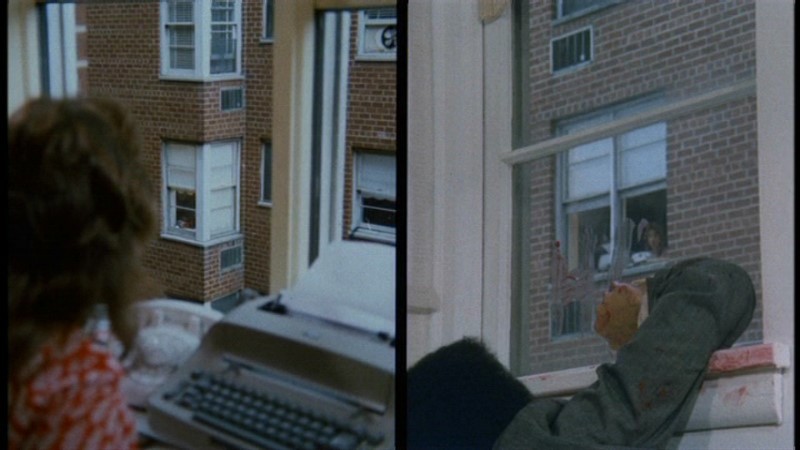 This prompts Grace to set out on her own investigation. She’s young and ambitious, despite how unseriously everyone around her takes her. There’s plenty of plot to discuss (or spoil), but plot is clearly not what De Palma is interested in here. This is a movie about, above anything else, the way society crushes the oppressed, be it Grace or Danielle, who are dismissed and infantilized by the men around them, or Philip, whose murder nobody but Grace seems to care about. The dialogue, it should be said, is either atrocious or intentionally ridiculous, so unrealistic that the film plays like a black comedy. Actually, I would say it’s both: while I acknowledge that the film is intended to be funny, the dialogue is just as often expository blathering as it is silly.

Towards the end of the movie, Grace follows Danielle and Emile to a mental hospital. Emile turns out to be a doctor; he cleverly has Grace committed by telling the staff that she’s new, and falsely believes herself to be a reporter. He then hypnotizes / brainwashes her into forgetting the murder and, more importantly, explains the major twist (which by this point was obvious). The brainwashing sequence is interesting, featuring Grace as Danielle’s sister Dominique, with various other characters appearing as other characters.

The plot soon resolves itself, but Grace doesn’t recover. We next see her in her childhood room, being questioned by the police as if she were a little girl, while she simply repeats what she’s been hypnotized into saying about it all: “There was no body because there was no murder.”

It definitely seems like De Palma is getting at some kind of social commentary here, but I’m not convinced he has anything particularly interesting to convey other than general scorn for oppression, nor do I think the various elements come together to form a cohesive whole. Still, taken individually, many of those elements are enjoyable. There’s plenty to appreciate here.