Something old, Something new…

Established in 1947, the Edinburgh International Film Festival is intimate yet world renowned in discovering and promoting the very best in international Cinema; some of it’s most notable films have included: Let The Right One In, Amores Perros, We Steal Secrets, and Knocked Up. There love for the art can be seen in there mission statement.

” Heralding and debating changes in global film making. Intimate in its scale, ambitious in its scope, and fueled by pure passion for cinema in all its manifestations, EIFF seeks to spotlight the most exciting and innovative new film talent, in a setting steeped in history.”

Fortunately for us they don’t just deliver the type of  indie film that symbolizes the existential plight of modern day European coal miners turn ballet dancers with a thirty minute close up of a  silver spoon on styrafoam dish (I’m sure there’s one out there), but also the type that gets us more primal, which makes us feel something on a very gross (and often grotesque) level, that’s right, I’m talking about the horror Films! Here’s the list below.

“A zombie film with an art-film sensibility, the engrossing, engaging and genuinely moving Maggie sees a bearded Arnold Schwarzenegger at his very best as a loving Midwest farmer who is determined to bring his daughter Maggie (Abigail Breslin) home after she is infected by cannibalistic zombies.”

“A slick and bloodily amusing film spin-off from the Dead Risingvideo game, set in the fictional city of East Mission, Oregon, where the authorities have created Zombrex, a vaccine that delays the effects of the infection. In the middle of the zombie mayhem is reporter Chase Carter (Jesse Metcalfe,Desperate Housewives) who teams with kick-ass Crystal O’Rourke (an impressive Meghan Ory) to fend off the walking dead and also try and escape the closed down city.”

“A post-apocalypse action-horror romp viewed as if made in the 1980s, Turbo Kid is a gleefully bloody fantasy film. It is 1997 after the apocalypse, and self-styled Turbo Kid (Munro Chambers) rides a BMX bike through slagheaps and dresses himself in a hero costume. When he meets and helps imperiled platinum blonde Apple (Laurence Leboeuf), they find themselves up against a vicious bike-riding gang. ImagineSpacehunter: Adventures in the Forbidden Zone meets BMX Bandits, but with more gore.” 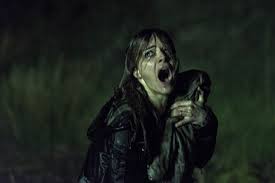 “A family who move into a remote mill house in Ireland find themselves in a fight for survival with demonic creatures living in the woods.”

“A teenager must survive a Halloween night from Hell when malevolent trick-or-treaters come knocking at her door.”

“A slick and stylish, special-effects driven version of the popular manga, Takashi Yamazaki’s wonderfully crazy film follows the misadventures of Tokyo teenager Shinichi Izumi (Shota Sometani), who has to try and co-exist with a mutant parasite that takes control of his right arm. Meanwhile, more evil-minded parasites start causing havoc, and this bumbling teen (and the parasite that he names ‘Righty’) must try and stop the alien invasion. Part horror and part superhero buddy story, it is a wild movie ride.”

“Five adventure-seeking Texan friends drive across country on a quest to find the ultimate Halloween scare. Their focus is on a series of terrifying, real-life haunted houses that have recently sprung up throughout the Southern states Underground, and unregulated, anything can happen in these “Halloween Houses”. Part mockumentary and part horror fiction, this clever mix of found footage and old fashioned scare tactics is a truly terrifying thrill for lovers of late night horror.”

“Vienna, early 1930s. One fine evening, Sigmund Freud has a new patient on his couch – a mysterious count who can no longer bear the “eternally long” relationship with his wife. The vain countess incessantly complains about not being able to look at herself in a mirror, the count tells the professor. Unaware of the fact that the count and his wife are vampires, Freud introduces his mysterious patient to a young painter, Viktor, who paints portraits that express more than a mirror ever could.”

“A 10 year old girl convinces a lonely classmate that she is a witch, forcing the child to become her assistant. Though their games are initially rather naive, they gradually take a nasty and violent turn.”

“With ’70s icon David Soul in the central role and James Mason providing gleefully villainous support, director Tobe Hooper (who had already unleashed The Texas Chainsaw Massacre) delivers some absolutely unforgettable scares as his atmospheric adaptation of Stephen King’s chilling vampire novel unfolds in terrifying fashion. With its ghastly vampires scratching at the windows to get in, Hooper’s TV movie would scare a whole generation, earn a theatrical release in several territories, and subsequently gain rightful recognition as an influential genre classic.”