The film adaptation of the New York Times bestselling book Meg has been in development for 20 years, but it looks like the project is finally heading into production as Eli Roth is in talks to direct the film, Variety reports.

The book revolves around two men who band together to neutralize an ancient shark that’s threatening the California coast. The Megaladon, considered one of the largest and most powerful predators in history, can reach a maximum length of 60 feet.

This time around the shark will be terrorizing the coast of China rather than California — a change that helped in bringing on Gravity Pictures as a co-financier. Andrew Fischel and Cate Adams will oversee development for Warner Bros.

Originally set up at Disney in 1997, “Meg” fell into limbo after Disney was unable to get it into production before another shark pic, “Deep Blue Sea,” hit theaters unsuccessfully.

While I think Eli Roth would be an interesting fit for the project, I’m mostly just excited to see a Megalodon on the big screen.

Here’s a handy scale to give you an idea of just how huge the Megalodon was. Though I fully expect the Hollywood version to exaggerate its size – because honestly, why not? 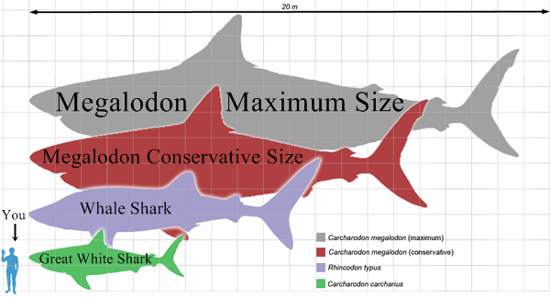