Felt is the new film from Jonathan Banker, who made the youth-culture horror flick Toad Road. His new film is a psychosexual social-horror film about the crippling effects rape culture has on women and its insidious pervasiveness in society. While the film delivers on its message, it doesn’t entirely work on a cinematic level. It has some great ideas but does not arrive fully formed.

Amy (Everson) is an artist living in San Francsico, dealing with the after-effects of a trauma she experienced. Amy feels disassociated from the people around her, finding solace in her art. She makes felt penises and wears them as a costume. It’s easier seen than explained. Amy gives herself an alter ego as a way of taking back some power. When Amy meets an understanding, sensitive young man (Audley), he seems to be everything that most guys aren’t.

I think this film belongs to a genre I’m not sure really exists: social horror. That’s when the horror doesn’t come from vampires, zombies, serial killers or demons but from the institutionalized toxic behavior that is perpetuated by a corrupt system. Felt is refreshingly non-fantastical; Amy is constantly pushed around by overbearing males who presume to own her and discredit her. Banker shoots these scenes with menace so the horror is palpable.

But the thing is, Banker and Everson can’t seem to decide if they’re making an indie comedy/drama or a horror movie. There are some really dark elements that do not mesh well with some of the more cutesy parts, like Amy’s day job dressed as a chicken. There’s something there about Amy feeling freest in a costume but it doesn’t work as well for me. I would have loved to see Felt as either a nerve-wrecking suspense thriller or a pitch-black dark comedy but here, the tone switches are clunky. 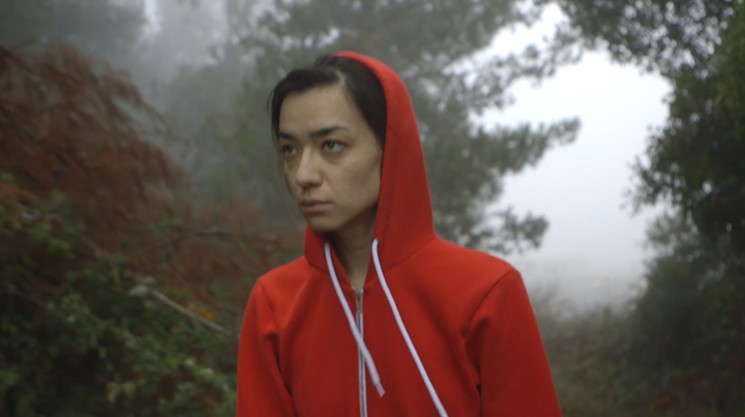 There’s a great sequence where Amy goes to a sleazy photo shoot wearing a body suit that looks like a female nude body. The photographer (played with gross abandon by someone named Merkley) reacts to her statement with an “okay, but seriously, show me your real tits” nervous but condescending chuckle. But Amy ends up befriending the other model Roxanne. The friendship between Roxanne and Amy is wonderful and I wish it had played a more substantial role in the film. Unfortunately the film goes a little too “standard” with how her friendship with Roxanne goes and how it affects her relationship with Kenny.

I kind of liked Kenny and the way the film played with the “single woman seeks good man” trope. I kind of wish that Banker went a little further with how their romance turned out. I won’t say more due to spoilers.

Felt should be applauded for taking on themes of rape culture and patriarchy in a very direct manner. Amy delivers a speech that should be shown to incoming high school students. The film is well-made with sharp close-ups and quick editing. The music is haunting. Dialogue is naturalistic.

Performances are solid all around. Some of the guys are cartoonishly awful but I have met guys like that before. The brilliantly named Kentucker Audley is good as Kenny and his performance is sweet to the point that I distrusted him. Roxanne Knouse is wonderful as Roxanne. But Amy Everson is mesmerizing. Her work is subtle but ferocious in its own way. She has never acted before but her acting is quite remarkable. I think  the story is probably very personal to her and her passion shows quite well.

Felt is an interesting film about some important themes. While it struggles with its tone and genre, the film’s commitment to its story and lead performances make it one to be seen. Felt may not be perfect but it does offer budding filmmaker Jonathan Banker and new actress Amy Everson a chance to shine.