Infecting the infected is easier said than done.

In yet another installment of The Strain, a lot of shit happens and yet none of it seems to matter. And somehow, this episode was over an hour again!

Look, before I dive into the actual events, I feel I really need to comment on this habit The Strain is making of going over its expected time of an hour. Here’s the thing: we as an audience start an episode (or a movie, or a book for that matter) with expectations about the length. We are essentially agreeing to devote a certain amount of time to the given story. Even in a movie, which has no “time slot”, we expect it to be somewhere between 90 and 120 minutes going in, and if it starts to go over that, we get antsy and restless. It’s anxiety-inducing, and not in a good way. A TV episode going over its time slot is much rarer, so arguably that effect is more intense.

Added time also degrades the expected structure of an episode. It might not be obvious, but structure is actually vitally important – again, especially on TV, where a series establishes an expected structure based on its genre and length. Without good structure, the story starts to drift aimlessly and feel meaningless.

And it’s especially aggravating to me that this episode in particular went over an hour because it was only 10 minutes over an hour.

It would be one thing if they just had so much content that they simply couldn’t make themselves cut it down. But this was 10 minutes. That’s nothing.

Cutting down an episode to meet its time limit is part of the writing process and the editing process. Part of the writer’s job is to plot concisely and efficiently. Getting the episode within its time frame is literally a minimum requirement. And a positive side effect of that process is that the story gets better and more engaging. So the fact that the creators couldn’t get this episode to fit within an hour just comes across as lazy to me.

That’s especially true when there’s not even much to say about the plot. Eph and Nora experiment on the infected elderly couple, but obviously they don’t succeed – except Nora gets an idea that I’m pretty sure is science-gibberish. Anyway, the average viewer isn’t going to understand anything more than “she gets an idea”, so I’m not sure it was worth spending time on the lead-up to that. Though I will say that this subplot was actually one of the stronger aspects of the episode, as the conflict between the doctors and the infected couple was layered and appropriately horror-y.

Meanwhile, Vasiliy and Dutch clear out a building of vampires, and then Dutch teaches Vasiliy how to swim. I don’t have any specific problems with this part, but again, considering how little that’s significant to the characters actually happens here, we could have spent less time on this. 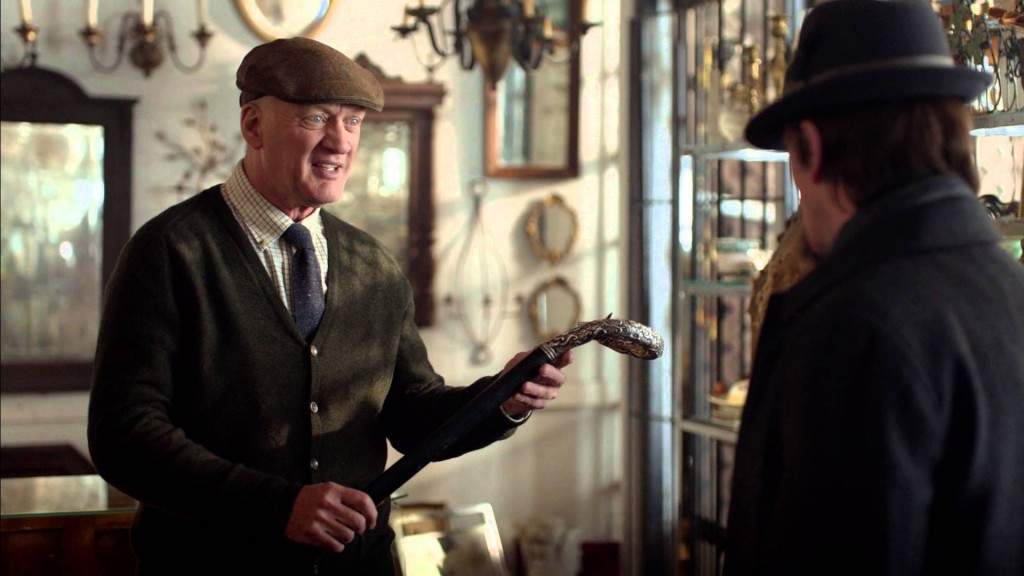 You would think the flashbacks about Setrakian as a middle-aged professor in Vienna hunting down a Nazi in possession of the cane sword for Eldritch Palmer would be the best part, right? And I guess it is hard to resist the elements of that plot. But what did these flashbacks add to the episode? Besides adding tension to the scene in present day when Setrakian confronts Palmer, I can’t think of anything.

When I was recapping The Strain‘s first season, I expressed concern about the direction the show would take with these flashbacks. Would they weave them in to the fabric of individual episodes, or would they stand alone as a separate story, like in Arrow? Unfortunately, they’ve since gone the easier and inferior route – the latter, Arrow-route.

And that gets at the true source of my impatience with this episode. It just doesn’t feel as though the writers are putting much effort into adapting the novel to the television format, which is inherently episodic. This means that, while I have no doubt that the overall story will be decent enough, individual episodes get incoherent, aimless, and increasingly frustrating. There’s no payoff here, just a lot of setup. And that’s saying nothing of the scenes involving Kelly and the Feelers.

Considering that I can’t binge the show anymore and I have to watch it with significantly more commercials, I really just don’t have the tolerance for this sort of problem now. I suppose I’ll have to adjust my expectations to survive the season.