Cool guys do look at explosions.

“The Silver Angel” begins with a few minutes from an old Mexican film about a wrestler-vampire hunter. To be honest, the concept sounds like it could work just as well as one of those crazy mashup movies (ie Abraham Lincoln Vampire Hunter or Wild Wild West), but I won’t begrudge old-timers’ ability to be just as zany as we are nowadays.

Anyway, this stuff was unexpected but fun, a welcome diversion from the meat of the plot. Of course, all it does in the episode is serve as a character introduction, but for now I’ll trust that Angel will prove important later on. And given how refreshing and out of left field it is, I’m not going to look nitpick.

Of course, we do eventually get back to the usual stuff. Eph and Nora release an infected vamp, who successfully spreads the infection. 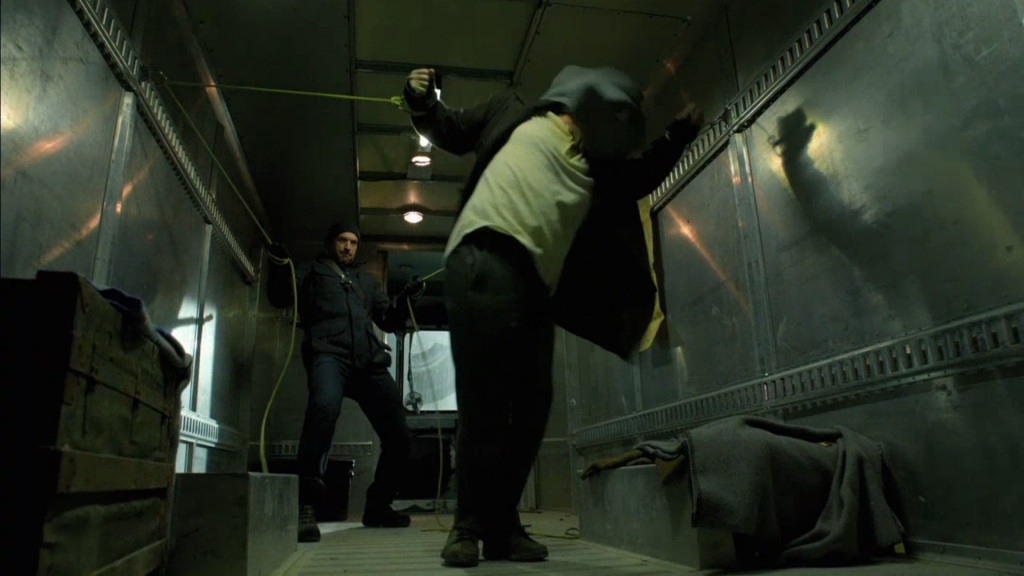 So the science works (in retrospect, that was kinda easy). But the Master does the logical thing here and forces the infected vamps to commit suicide. Which makes for a nice scene when Eph and Nora watch them jump from a rooftop one by one, but I think it’s kind of weird that Eph sees this as a good thing. Like sure, his infection works, but the Master has managed to reduce it to simply a slower way to kill vampires. The whole point was to start an anti-plague, and that seems impossible now.

Meanwhile, Eph tries to bond with Zach by taking him to the batting cages, but Zach is too depressed to enjoy himself. As painfully sad as this is, this is the kind of scene we need from Zach, not more tantrums. So this subplot is definitely another positive.

Of course, it also means that Kelly’s Feelers catch Zach’s scent at the cages later on. Right now, the only glimpses we’ve been getting of the Feelers have been as an ominous ending scene. And granted, at least this time it shows that they’re getting closer, but are these scenes really necessary? I get that Kelly is going to find Zach eventually, and I get that the Feelers are creepy. I don’t think I need to be constantly reminded.

Fet had a secondary role, but was easily one of the best things about the episode, mostly for the lines he gets: “Fet hungry”, and the little speech about cool guys (not) looking at explosions, just before his dynamite goes off in the subway tunnel. (Incidentally, I know the Carroll Street station; it actually looks cleaner here than in real life.)

I never thought I’d say this, but Setrakian’s role so far this season have been the weakest. I don’t care about these flashbacks about his search for the Occido Lumen, and he’s doing almost nothing in the present. In this episode he and Dutch find Fitzwilliam in Staten Island and ask him to join them. It’s hardly gripping material.

Still, I can’t say anything here was actively bad. As usual, when The Strain is good, it’s not because of some radical shakeup to its formula. The gears just happen to be running smoothly.