It can only hurt you if you believe.

Yesterday marked the 10 year anniversary of The Skeleton Key– a horror movie which boasted an all-star cast, a unique plot, and… a score of 38% on Rotten Tomatoes.  While approximately 58% of audience members enjoyed the film, critics seemed to think it was a “paint-by-numbers supernatural thriller that [was] more interesting for its locations than for its story” (Ethan Alter, Film Journal International) and “interminable from minute one” (David Nusair, Reel Film Reviews). 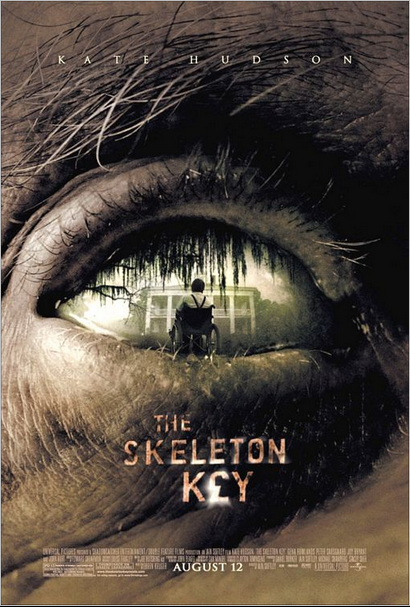 I first saw The Skeleton Key when I was twelve years old; a year too young to meet the PG-13 rating.   I was thrilled, terrified, and intrigued by the intricacy of the plot and creepy atmosphere that seemed to be a character in and of itself.  I watched it again fairly recently.  Even to an adult, the film holds up and remains just as scary as it was ten years ago.

If you haven’t seen The Skeleton Key, here’s a quick summary, sans spoilers:  A young hospice worker, Caroline (played by Kate Hudson), takes a job as a personal care assistant in a remote plantation house in New Orleans.  She’s charged with taking care of Ben (John Hurt), an elderly man who has been rendered completely paralyzed and catatonic due to a stroke.  Also living in the house is Ben’s wife Violet (Gena Rowlands), an “old South” woman who has hired a lawyer, Luke (Peter Saarsgard), to manage her and Ben’s affairs in their advanced age.

While in the house, Caroline begins to notice some odd things: the attic, where Ben supposedly had his stroke, is locked and can’t be opened with the master key (the titular skeleton key); Ben’s symptoms are inconsistent with that of a stroke survivor; and the attic (when Caroline finally gets it open) is filled with paraphernalia related to Hoodoo (not to be confused with Voodoo or Vodoun).  Suddenly, Caroline is not so sure that it was a stroke that hurt Ben… The Skeleton Key is far from your typical haunted house film.  It incorporates folk magic, a complex, racially charged plot line, and a chilling ending that is atypical for a horror movie.  And of course, it doesn’t hurt to have a few creepy images, a haunting soundtrack, and New Orleans, the birthplace of Marie Laveau, as the setting for the story. While certainly not perfect in terms of accuracy about Hoodoo and respect for the people who practice it, some cliché dialogue and the fact that the writer and director of the film fell back on overused character tropes, The Skeleton Key remains one of the most original horror movies I have ever seen.  It doesn’t stream on Netflix anymore, but you can still rent the DVD (and probably find it elsewhere online).