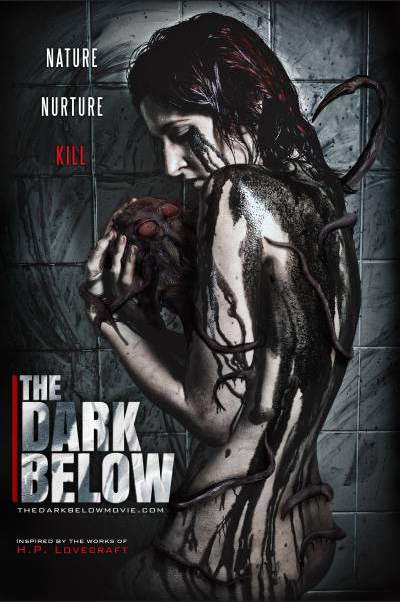 The new horror film directed and co-written by indie filmmaker Steward Sparke is in post-production and well on its way to a release.  In the meantime, a teaser trailer for The Dark Below has been unleashed, as has the following official summary:

During a traumatic accident whilst on a deep-sea dive in the depths of the Atlantic Ocean, Olive, a gifted, young marine-biologist discovers an unearthly creature. Loosing her dream job, Olive smuggles the creature home, intent on studying it in her basement, unbeknownst to her devoted boyfriend Matt. Whilst struggling to re-adjust to landlocked life and recover from her recent trauma, Olive begins to realize that she and the creature share a symbiotic bond that drives her to carry out its sinister will.

Sounds creepy, scary, and Lovecraftian already.  What’s that saying they tell people about to explore national parks? “Take only pictures; leave only footprints.”  Seems like it should apply to the ocean, too.