I’m transforming into a monster.

Horror films and feminism have a tricky relationship. You know, the whole final girl/virgin vs. murder victim/whore thing. But werewolves and women have sometimes been linked, with werewolf transformation being interpreted as a metaphor for the menstrual cycle by some literary critics. Danish director Jonas Alexander Amby debuts with When Animals Dream (Når dyrene drømmer in the original Danish). Starring Sonia Suhl, Lars Mikkelsen (House of Cards), Sonja Richter (The Homesman) and Jacob Oftebro (Kon-Tiki), the film was written by Rasmus Birch.

Marie (Suhl) starts to see rashes on her body that worries her father (Mikkelsen). Bullied by co-workers at her fish processing plant, she develops a friendship with the dreamy Daniel (Oftebro). As her conditions worsens, she experiences several frightening transformations. Soon Marie starts to realize she might share some secrets with her wheelchair-bound mother (Richter). 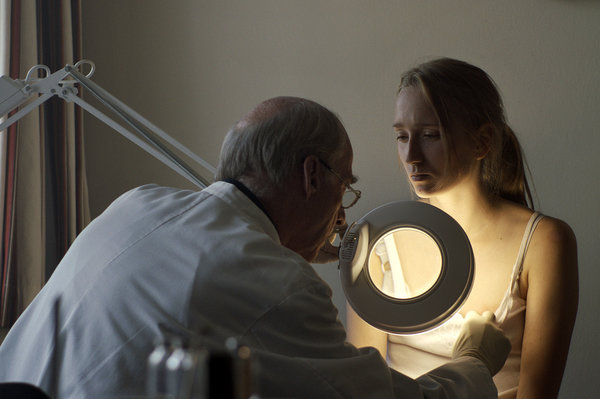 When Animals Dreams is a stark, cold horror film. It shares some superficial similarities with the Swedish horror classic Let the Right One In by being deliberate and atmospheric. The film is more about mood and feeling, rather than scares. I liked that about the movie, because its few scare moments feel earned and genuine.

There is a theme at play here about women against patriarchy. Marie and her mother are the only major female characters, and the men around them want to shut them up or keep them sedated both literally and figuratively. Marie’s werewolf transformation feels like an outcry against men caging up women. It’s an interesting theme for the film, but not terribly original.

The acting in the movie is pretty great. Sonia Suhl really tears into the role, bringing quiet rage and animalistic physicality to the role. Mikkelson also does well as a guy in a bizarre, uncontrollable situation. The rest of the supporting cast is fine, but no real standout performances. 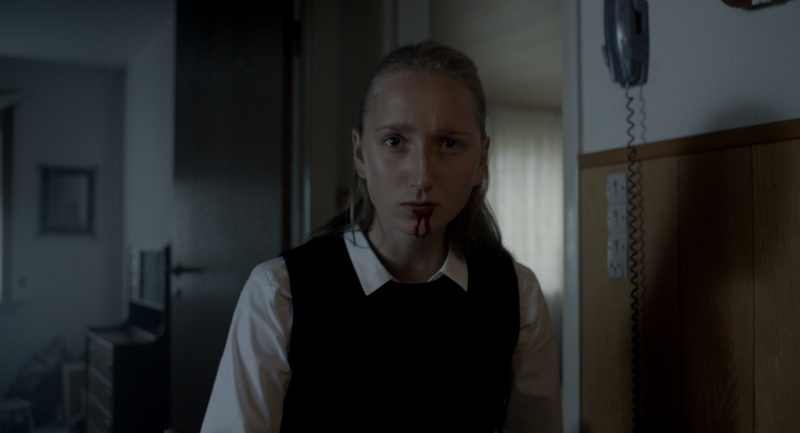 Amby’s direction, to be honest, lacks much personality or uniqueness. Because the film is so heavy–there are too few moments of levity or brightness–the 84 minute long film is labored. Amby is a new director, and he has the potential to grow in his craft. But I just didn’t find this film as memorable or exciting. In the climax, where the film finally could have gotten some momentum going, Amby goes for a standard “where is the monster” aesthetic, robbing his own protagonist of the chance to take control. We hardly see her, instead following the various villagers she’s attacking.

When Animals Attack is definitely an interesting movie. It’s handsomely made, though a bit bland and enjoyable for a foreign take on the werewolf genre. With a game leading lady and a relevant theme, it’s definitely worth a watch but probably won’t go down as a low key classic.