Saint Nicholas is not coming this year. 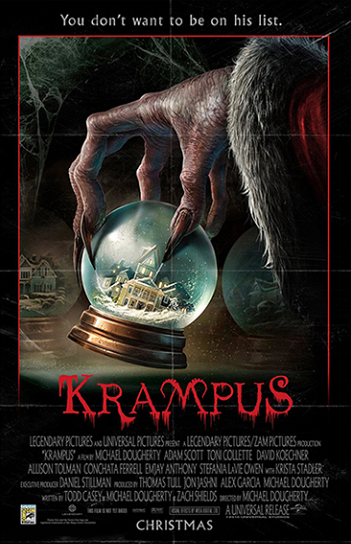 It’s the most wonderful time of the year! Or is it? This new film written and directed by Michael Dougherty takes the wholesome, family-oriented Christmas movie genre and completely flips it around.  Instead of featuring a loving and supportive family, the clan in this movie drinks heavily and spits out one-liners like, “Looks like Martha Stewart threw up in here.”  Rather than heartwarming scenes of children putting letters in the mailbox addressed to “The North Pole,” a little boy angrily tears up his letter and throws it out of his bedroom window.  And instead of Santa Claus coming to grant Christmas wishes, an evil spirit entraps the family in their home and viciously terrorizes them.  That evil spirit is the titular Krampus. 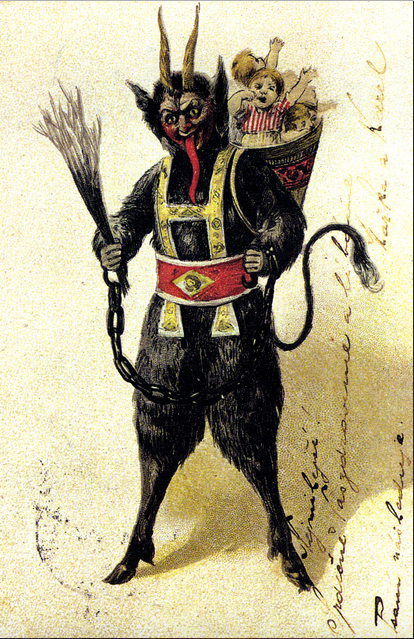 Krampus stars Toni Collette, Adam Scott, Allison Tolman, and David Koechner.  The title and plot come from the creature from Germanic/Alpine folklore who is essentially the “anti-Santa”; instead of presenting children with gifts, he targets bad kids and carts them off to hell.  Or cannibalizes them, depending on who you ask.  Like Sinterklaas/ Santa Claus, it is likely that Krampus has pre-Christian, Germanic Pagan roots.  The summary of the film is:

When his dysfunctional family clashes over the holidays, young Max (Emjay Anthony) is disillusioned and turns his back on Christmas. Little does he know, this lack of festive spirit has unleashed the wrath of Krampus: a demonic force of ancient evil intent on punishing non-believers. All hell breaks loose as beloved holiday icons take on a monstrous life of their own, laying siege to the fractured family’s home and forcing them to fight for each other if they hope to survive.

It seems like the film takes a few creative liberties with the mythology.  Even so, it looks like a fun time.  If you plan on seeing it, it will be in theaters December 4th.  If nothing else, Toni Collette is in it, and as I’m sure we can all agree, her presence in any movie is a gift.