“I just wish you could stay to see my performance.” 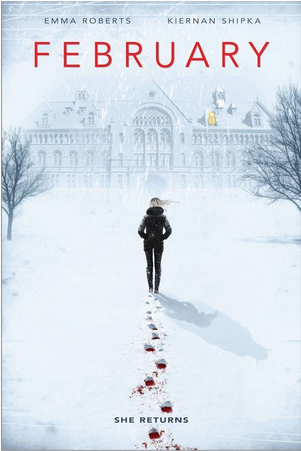 For the past month or so, word has been going around about an indie horror film called February.  The film was written and directed by Oz Perkins (son of Norman Bates actor Anthony Perkins), and stars Emma Roberts, Kiernan Shipka, and Lucy Boynton.  Due to the casting, and due to the fact that Perkins is behind it, the horror world has been shivering with anticipation for February.  And now, finally, the first trailer has arrived!

February has already been screened at the Toronto International Film Festival and is scheduled to make an appearance at Fantastic Fest this month.  The summary provided on the TIFF website reads as follows:

Kat (Kiernan Shipka, Mad Men) and Rose (Lucy Boynton) are in different grades at a prestigious prep school for girls, where they are stranded after their parents mysteriously fail to retrieve them for winter break. Meanwhile, a haunted young woman, Joan (Emma Roberts), makes a bloody pilgrimage across a frozen landscape toward the school. As Joan gets closer, Kat is plagued by increasingly terrifying visions, and Rose can only look on in horror as her younger schoolmate becomes possessed by an unseen evil force.

Although the film has had limited exposure, it has already garnered glowing reviews from critics.  Variety‘s Joe Laydon describes February as a “slow-burning, sure-footed scary movie…An atmospheric and suspenseful indie with a subtle but unmistakable retrograde feel, it should score with sophisticated genre aficionados and anyone else inclined to savor a stealthy, unsettling escalation of dread before full-bore horror kicks in.”

Not bad for Perkins’ directorial debut.

A theatrical release, if there is to be one, has not been set yet.  Judging from the critics’ responses though, we can predict that after the festival screenings, everyone will be able to see February.