A priest even blessed the set.

Production has officially begun on the sequel to the 2013 smash hit The Conjuring.  The sequel, reportedly titled The Conjuring 2: The Enfield Poltergeist, was written by Chad Hayes and Carey Hayes, with input from director James Wan.  The three were the team behind the first movie, thus we can expect great things from this upcoming installment. 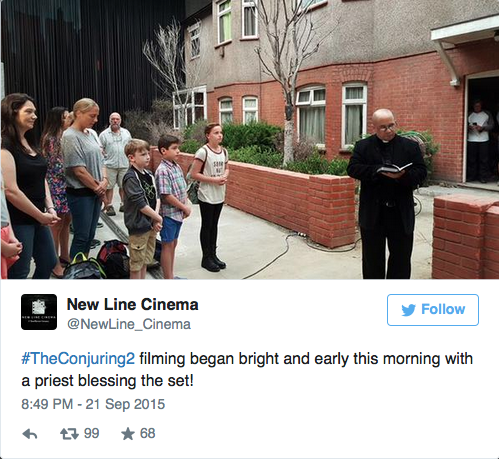 The Conjuring 2 stars Vera Farmiga and Patrick Wilson, who will be reprising their roles as real-life paranormal investigators Ed and Lorraine Warren.  The film will be based upon the reported “poltergeist haunting” in a home in Enfield, England during the years of 1977-1979.  Although the people who claimed to be affected by a poltergeist, sisters Margaret and Janet Hodgson, were determined by authorities and experts to be lying, Ed Warren was convinced of demonic and supernatural activity.  Even if the claims were false, poltergeist stories and tales of demonic possession never get old.

The Conjuring 2 premieres in the United States June 10th 2016.  Have you marked your calendars yet?