If you were in need of a genre-blending gore-fest, you’re in luck. 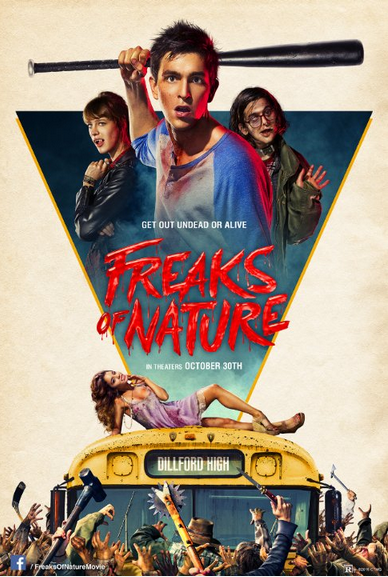 In a mere eight days, the United States of America will experience a vampire movie, a zombie movie, and an alien invasion movie, all at the same time.  It’s the conglomeration of monsters that no one asked for, but one that looks like a lot of fun.

Freaks of Nature was written by Oren Uziel, and was voted “Most Liked” unmade script on The Blacklist in 2010.  The film itself was directed by Robbie Pickering and stars Mackenzie Davis, Vanessa Hudgens, Joan Cusack, Nicholas Braun, Keegan-Michael Key, Ed Westwick, Patton Oswalt, and Bob Odenkirk.

In case the star-studded cast isn’t enough to convince you to see this movie, here’s a quick synopsis:

In the town of Dillford, humans, vampires and zombies were all living in peace – until the alien apocalypse arrived. Now three teenagers-one human, one vampire, and one zombie-have to team up to figure out how to get rid of the visitors.

The trailer is hilarious and gory, and contains all the elements of a classic comedy-slasher: booze-guzzling men sporting mullets and tank tops, hot female vampires, a nerdy male protagonist, and a (literally) brain-dead best friend who looks like he stepped off the set of Wayne’s World.  And also sexual jokes, innuendos, and liberal use of the word “fuck.”

Freaks of Nature arrives in theaters on October 30th.  I sincerely hope the film ends with the lovely and inclusive sentiment of “we’re all freaks of nature.”  As noted in the trailer (below), can’t we all just get along?