After six movies in six years, the “Paranormal Activity” movie series has been a consistent series in its tone, style and scare factor. The films are cheap, turn quick profits, and offer some spine-tingling (or silly depending on your perspective) mythology to scare us each year. The first film, released in the U.S. in 2009, was a ginormous success, and a real horror landmark at the time. It brought found footage to the mainstream so we have that to thank or blame for that. It’s interesting that the sequels offer more of the same but also expand the story.

Ryan (Murray) and his wife Emily (Shaw) are celebrating Christmas with their adorable daughter Leila (George). Along for the holidays are Ryan’s brother Mike (Gill) and Emily’s sister Skylar (Dudley). Ryan and Mike discover an old box with a really old camera and some videotapes. They realize the camera picks up flecks of some weird substance in the air and is also unlike any other camera they’ve ever seen. The tapes show some kind of ritualized training. Leila starts exhibiting strange behavior. Then the people on the tape start describing Leila’s bedroom. 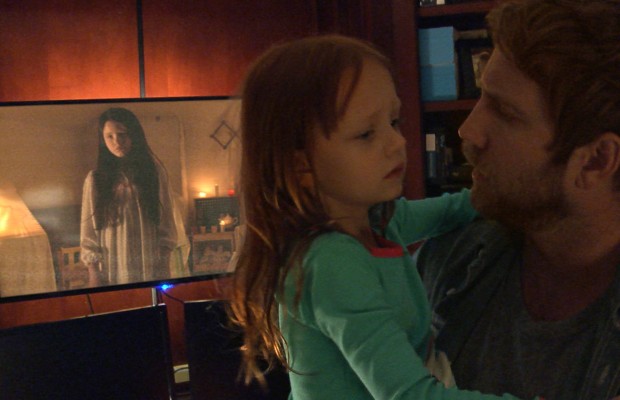 The hook for this latest installment is that the camera that Ryan finds picks up the demon that’s stalking Leila. So we actually get to see brief shots of Toby in his forms. The new camera adds something new to the series, much like the change of setting in The Marked Ones. The series is always on the verge of becoming stale, with the found footage format already past its novelty. And the filmmakers have stated this is the last one (but who knows) so it makes sense that the filmmakers want to give the audience some closure and gave Toby a tangible figure.

I thought this movie was pretty scary, and it also did a good job setting up some delicious dread. Some of the best moments feature Ryan and Mike watching the footage (set between PA3 and 4) and having it interact with their own timeline. It adds a creepy inevitability to the story. Also seeing the cultish future for Katie and Kristi is really creepy with their grandmother Lois. This movie has a lot of cool ideas and moments, and Plotkin stages some of the scare scenes effectively.

At some point the film reminded me of Poltergeist, with the cute girl communicating with people we can’t see and the family rushing to save her from another dimension. And I gotta say, the manifestation of Toby is weak. He appears like some sort of blob that manifests and…attacks? I guess with only a $5 million budget, it’s hard to have many effects. 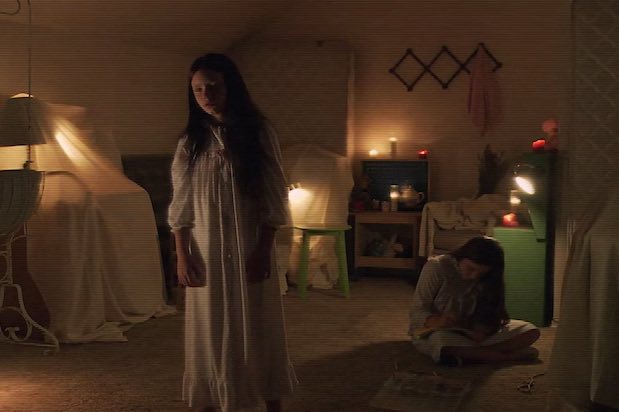 The characters actually feel smart, investigating their experiences. There isn’t too much of that “just ignore it” nonsense, which never feels organic in the films. I liked that Ryan, Emily, Mike, and Skylar were basically decent people who were trying to do their best for the family. This is contrasted with Micah in the first film or the dad in the 2nd one. It makes the film easier to watch, because no one is acting stupid or villainous for the sake of drama.

Acting wise, the performances were pretty solid. Chris J. Murray and Brit Shaw are especially as the worried parents, trying to find a way to save their daughter. While they still feel like they are playing to a camera instead of being natural, both actors provide enough life to their characters so that they feel real instead of mere scare victims. Ivy George is also effective as the kid, without being too precocious or annoying.

Paranormal Activity: The Ghost Dimension isn’t a horror classic but the scares are fun enough to enjoy the movie. It’s a solid, nerve-wrecking conclusion to the series. If you love the series, it;s right up your alley. Even casual fans will some parts really fun.