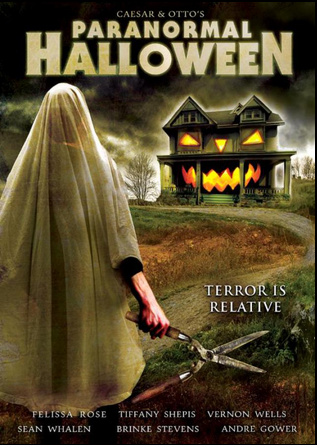 This week, I had the pleasure of viewing Dave Campfield’s most recent film Caesar and Otto’s Paranormal Halloween.  For those who are unfamiliar with the characters Caesar and Otto, they are a pair of half-brothers who, over the course of five movies, have found themselves in ridiculous and humorous situations involving the supernatural.  Dave Campfield, the writer and director of all of the Caesar and Otto films, stars as Caesar, opposite of Paul Chomicki, who plays Otto.

Caesar and Otto’s Paranormal Halloween opens with a familiar scene: a bored babysitter on an autumnal night in suburbia.  It is quickly revealed that Caesar,  a man in his early thirties, is the babysitter, dressed in a blonde wig, crop top, and stuffed bra.  Otto comes over, teases Caesar about his outfit, and turns on the TV.  A local news station airs a report on severe funding cuts on mental health services, and then a second later, broadcasts a breaking news story about a psychiatric patient, named Michael Myles, escaping from a hospital for the criminally insane.  Years ago, Myles had murdered a number of babysitters, and his former doctors guessed that he would return to his childhood home.  Predictably, that’s exactly where Caesar and Otto are.

The rest of the film follows all of the typical horror tropes: Caesar and Otto stay in a house built on sacred Native American grounds and has a history bloodshed, a pair of priests discuss exorcism, Otto discovers that his mother was a witch, ghosts appear, people get possessed, chaos ensues, and people get stabbed at a Halloween party.  Throughout the film, classic and popular horror films are referenced and lampooned.

The film is, in a nutshell, a self-aware micro-budget horror parody.  And it’s highly enjoyable.

Campfield recently published an article titled The Masochistic Existence of a Microbudget Filmmaker, in which he defends under-valued indie films.  ” You’d swear John Q. Public has no clue that not every film is made for fifty or more million dollars,” he writes. “No matter how many countless hours, blood, sweat and tears you’ve put into your work, he’s there to tell you how much you suck, the movie sucks and why you have no right making movies or breathing air to boot.”  In the article, Campfield makes a point to tell his readers that filmmaking is entirely different game than it was twenty years ago.  Youtube, Vimeo, and other video-sharing platforms have made it more difficult than ever for indie filmmakers to get noticed and take their careers to the next level.  But they keep going for no other reason than their love of the craft.  And it’s clear from the on-screen chemistry between the actors that Campfield, his co-stars, and everyone else involved loved making this film.

Caesar and Otto’s Paranormal Halloween is now available to purchase on DVD through Amazon.  The film is likely to garner mixed reactions, but then again, so is every film, regardless of the budget and production quality.  Personally, I thought it was entertaining enough to warrant a few re-watches.  If you crave unpretentious slapstick horror-comedies, this may be exactly what you need.