Kids looking for a dumb, gory zombie comedy could do well to look to Scout’s Guide to Zombie Apocalypse. It fits the bill for an over the top action movie, even if it’s not going to be remembered much beyond this Halloween weekend when it will be a major frontloaded release. The movie is directed by Christopher B. Landon, known for his work on the Paranormal Activity films. The film stars Tye Sheridan (The Tree of Life), Logan Miller (The Stanford Prison Experiment), Joey Morgan, David Koechner (Anchorman) and Sarah Dumont.

Scouts Ben (Sheridan), Carter (Miller) and Augie (Morgan) are best friends. Ben and Carter are starting to feel like they’ve grown out of the Scouts but Augie is still into it. At a campout, the boys are waiting for their Scout Leader (Koechner) but Ben and Carter plan to sneak off to a party while Augie is sleeping. Augie catches them on the way out and ends their friendship. On the way to the party, Ben and Carter see that the town is deserted and realize that it’s a zombie apocalypse. With the help of cool girl stripper Denise (Dumont), the boys fight against the undead with the help of their scouts training. 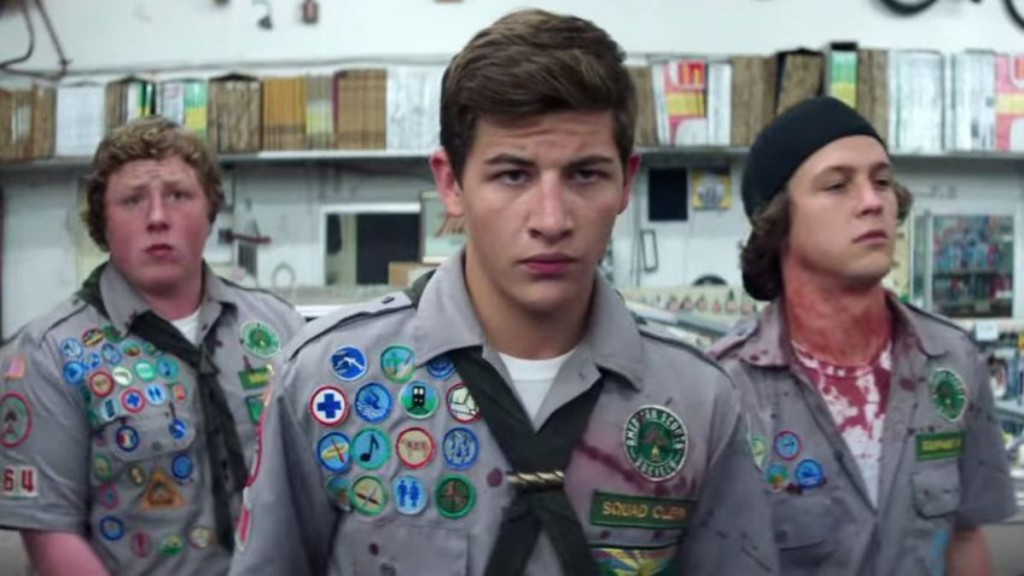 Just to be clear: the comedy in this movie is really juvenile. Lots of dick jokes, sex jokes, gross-out jokes. Scouts Guide has punchlines that you can see from a mile away. That’s not necessarily a bad thing. The film is watchable, and easy to digest much like its pop song soundtrack. There’s a place for films like this, where someone can watch it once and forget about it. Scouts Guide is also really energetic and lively, which makes it really fun to watch.

Ben, Carter, Augie and Denise are pretty 2-dimensional characters. They fit snugly into their cliche characters. Ben is the straight arrow nice guy, Carter the disgusting horndog, Augie the sincere loser fat guy and Denise the impossibly hot, impossibly cool girl. Scouts Guide doesn’t do much with these characters, their lessons are learned exactly as you’d expect. It would have been nice for this movie to take the route of something like Zombieland, which felt really fresh and exciting back in 2009.

The biggest plus this movie has to offer is its gore effects. The zombies and the violence are well executed, with some terrific make-up and practical effects. The action choreography is really fun, with some great humor added in there. The climax takes place at a neon-blue colored rave and it’s really exciting. There is also a scene featuring some zombie cats, and honestly that was my favorite part of the movie.

The actors are good in their roles, despite the lame characters. Tye Sheridan was a great child actor and now he gets to do some silly comedy and be a hero. Logan Miller and Joey Morgan are decent and they all have a nice chemistry together. Sarah Dumont tries hard to escape such an unbelivable role. These are not groundbreaking performances, but the making of the moie must have been fun and it shows.

Scouts Guide to the Zombie Apocalypse is enjoyable but instantly forgettable. With some over the top action and constant sex jokes, the movie definitely earns its R rating. I can recommend it as a breezy Halloween iTunes rental. It’s a fun diversion, but there was potential for it be much more clever and inspired.