Not your average babysitter horror. 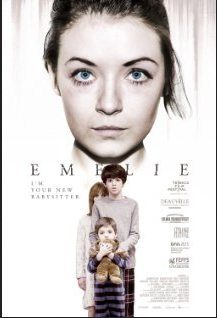 Michael Thelin‘s first narrative feature film Emelie made a splash at its premiere screening at the Tribeca Film Festival this year.  Film critic Frank Scheck wrote a review of Emelie for The Hollywood Reporter, in which he described the film as “genuinely unsettling, tapping into any parents’ worst nightmares about leaving their children attended by someone they don’t really know” and even said that “Parents contemplating hiring an unfamiliar babysitter for their children would be well advised to avoid Michael Thelin’s low-budget thriller about a psychotic young woman put in charge of three youngsters by their suburban parents.”  A more detailed synopsis reads:

The Thompsons, a loving family living in a peaceful suburb of Buffalo, New York, are the definition of wholesome American normalcy. When their regular babysitter can’t make it, Dan and Joyce turn to her friend Anna to watch their three children while they go out to celebrate their anniversary. At first, the young woman seems like a dream come true for the kids, as she allows them to play with things that are usually off-limits. But, as her behavior becomes increasingly odd, the frightened kids realize her intentions are dark and twisted – and that she may not even be Anna at all.

Early this week, MPI Media Group’s genre label Dark Sky Films acquired the domestic distribution rights to Emelie, and according to their press release, has already made plans for a theatrical release in early Spring of 2016.  Emelie stars Sarah Bolger, Thomas Bair, Chris Beetem, Susan Pourfar, and Joshua Rush. The trailer (below) is scary and disturbing in all the best ways. Check it out!