Better stock up on some Raid. 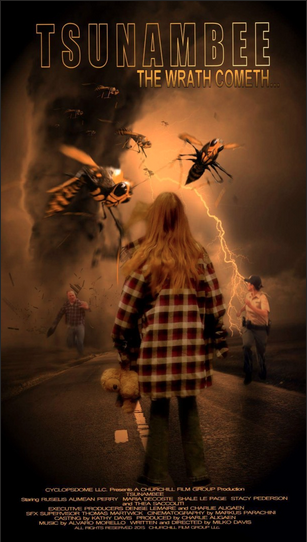 As the world ends, a wrath is released that torments man for days. Symbolic in scripture of locusts plaguing man, huge swarms of wasps attack a small rural town at the beginning of a series of apocalyptic events. As a gang tries to leave the city, their escape is cut short by a group of farmers taking the law into their own hands. A local sheriff is the only hope of order left, but options are limited as the groups become tangled trying to escape an attack of biblical proportions. They must now work together to survive as the end of time ensues by setting aside their differences. Or die the death of ages.

If a swarm of wasps doesn’t sound like a nightmare, I don’t know what does.  A release date has not yet been established, but two trailers and a poster have been unleashed.  Both look promising, or at the very least, entertaining, but I do have one issue with the film that I need to address.  The title is Tsunambee, suggesting that bees are the antagonist.  As I hope all of you know, bees are mostly innocuous to humans, and absolutely vital to the survival of the planet.  Wasps, however, are malicious little psychopaths who are undoubtedly agents of the Devil himself.