Trespassing is discouraged for a reason. 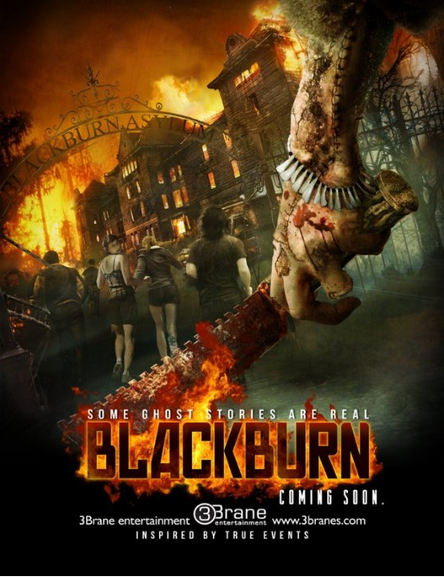 According to various sources on the Internet, Archstone Distribution, through its genre branch Tombstone Distribution, has acquired the rights to the upcoming horror film titled Blackburn.  The film, written by Natasha Baron and directed by Lauro Chartrand, has the tagline “Some ghost stories are real,” suggesting some intriguing and nightmare-inducing mythology.  Blackburn stars horror veterans Ken Kirzinger (Jason Voorhees in Freddy vs Jason), Brad Loree (Michael Myers in Halloween: Resurrection), Jen and Sylvia Soska (American Mary), Sarah Lind (The Exorcism of Molly Hartley), Emilie Ullerup (A Little Bit Zombie), and Lochlyn Munro (Dracula 2000).

Blackburn seems to a cautionary tale, urging young people to heed the warnings of small-town locals:

A forest fire and rock-slide trap five bickering college friends in a small Alaskan ghost town with a horrifying history. When they seek refuge inside the torched ruins of Blackburn Asylum they must fight to survive as the angry inhabitants slaughter the friends one-by-one.

A theatrical release date hasn’t been set yet, but a trailer was dropped recently.  Judging from the trailer, we can expect bloody carnage, brutal murder scenes, and some liberal use of a blowtorch…