We also have a bonus clip. 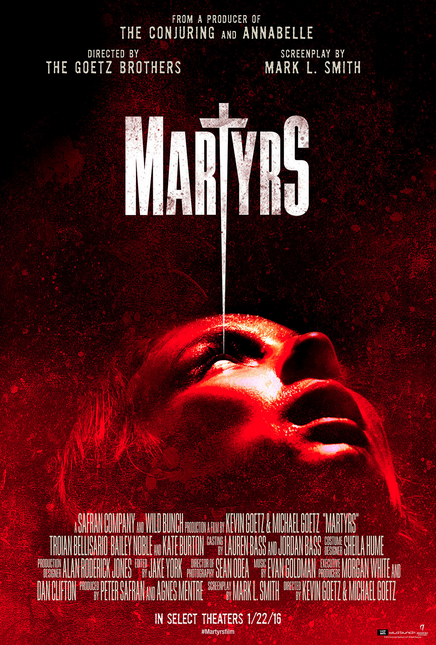 A few weeks ago, we shared a few stills from the Goetz Brothers‘ remake of Martyrs.  In case you missed it, or you’ve repressed the memory, the controversial French horror film about a woman and her friend seeking justice against the people who tortured the former as a child, was updated and Americanized.  The remake stars Troian Bellisario, Bailey Noble, and Kate Burton, and will be released in select theaters January 22, 2016 and on VOD, DVD, and Blu-ray on February 2, 2016.

Ten-year-old Lucie flees from the isolated warehouse where she has been held prisoner. Deeply traumatized, she is plagued by awful night terrors at the orphanage that takes her in. Her only comfort comes from Anna, a girl her own age. Nearly a decade later and still haunted by demons, Lucie finally tracks down the family that tortured her. As she and Anna move closer to the agonizing truth, they find themselves trapped in a nightmare – if they cannot escape, a martyr’s fate awaits them…

This week, the official trailer, as well as a minute-long clip, was released for public consumption.  I’ll admit it: the trailer is pretty horrific and promises all of the violence and depravity that made the original film so infamous.  But I can’t help but think that discussions of torture, religious extremism, and childhood trauma sound better en français…