Christmas can be killer. 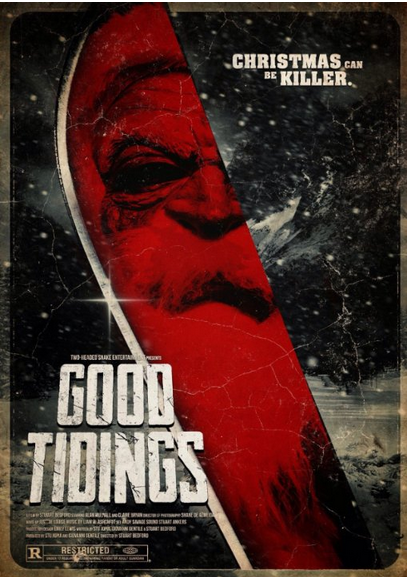 Does anyone else find the concept of Santa Claus distasteful? Think about it: an old man keeps tabs on the world’s children all year, runs a sweatshop where enslaved elves build millions of toys, and then forces a team of bewitched reindeer to fly around the globe in one night, making stops at people’s houses, and somehow sliding down their chimney’s to drop off presents (for which he takes sole credit).  What’s even more disturbing is that parents indoctrinate their children with this mythology as a method of behavior modification.

Since there are dozens of horror movies revolving around the concept of an “evil Santa,” it’s clear that I’m not the only one who gets creepy vibes from Saint Nick.  The newest addition to this subgenre is called Good Tidings.  Written and directed by Stuart W. Bedford, Good Tidings stars Marcella Hazell, Alexander Mounsey, Alan Mulhall, Emma Hind, Stu Jopia, and Giovanni Gentile, who are also credited as co-writers.

A homeless war-veteran with a chequered past must rely on a side of himself once thought buried when he and his companions are targeted by three vicious psychopaths wearing Santa suits on Christmas Day.

Good Tidings will be released in the United Kingdom on December 25th, 2016.  Here’s the first trailer!