Those prudes over at MPAA, amirite? 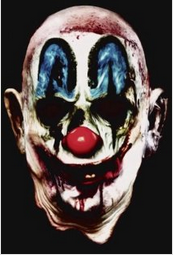 Rob Zombie has never been one to shy away from graphic violence, nudity, crass language, or disturbing images.  Most, if not all, of his films contain a combination of all four and have all managed to obtain an R rating.  But somehow, his newest project, a horror film titled 31, has been given a rating of NC-17 by the MPAA ratings board, not once, but twice after Zombie edited and resubmitted it.

Like all filmmakers, Zombie understands that a rating of NC-17 is no bueno in terms of distribution.  After the second rounds of results from the MPAA, Zombie updated his millions of fans with the news about 31: 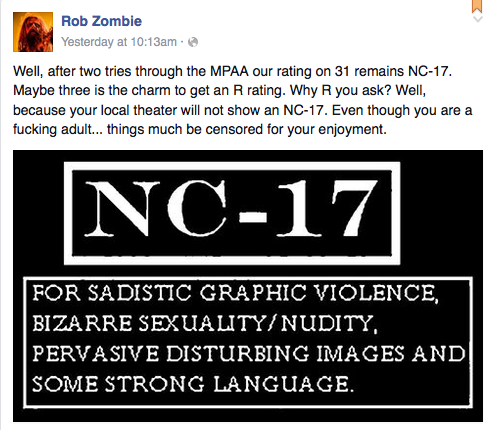 Given the content and ratings of Zombie’s previous movies (lookin’ at you, House of 1000 Corpses and The Devil’s Rejects), obviously I have some questions.  Mostly, what exactly is in this movie that earned the dreaded NC-17? And also, will the MPAA ever reduce the rating to R, or is the current board decidedly anti-Zombie?

In any case, 31 will premiere at the Sundance Film Festival next month.  Here’s a brief synopsis of the film, in case any of you are attending the festival:

31 tells the story of five carnies in 1976 kidnapped on the morning of Halloween and held hostage in a remote industrial Hell. While trapped, they are forced to play a violent game called 31. The mission is to survive 12 hours against an endless gang of grease-painted maniacs.