We’re all just tryin’ to find our way home. 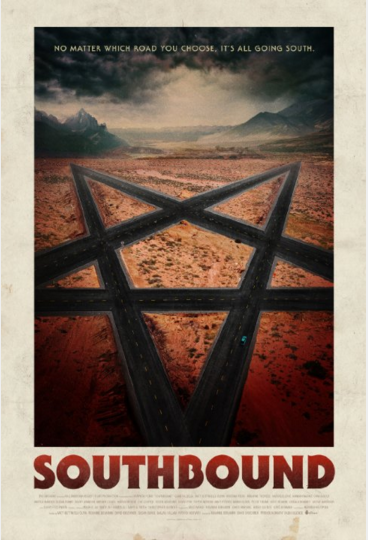 From the creative minds behind the 2012 found footage horror anthology V/H/S comes the upcoming film Southbound.  Southbound is also an anthology, and boasts V/H/S veteran directors Roxanne Benjamin, David Bruckner, and Radio Silence, as well as The Pact II‘s Patrick Horvath.  The horror features writing from Benjamin, Bruckner, Horvath, Matt Bettinelli-Olpin, Susan Burke, and Dallas Richard Hallam.  You may be thinking, if Southbound is an anthology horror, how is it different than V/H/S?  Here’s how: Southbound, unlike V/H/S, uses traditional cameras and narrative structure, rather than using a found-footage format.

Five interlocking tales of terror follow the fates of a group of weary travelers who confront their worst nightmares – and darkest secrets – over one long night on a desolate stretch of desert highway.

The film premiered last September at the Toronto International Film Festival, and then quickly moved on to terrify audiences at the AFI Fest and the Paris International Fantastic Film Festival.  It will be released in the United States in limited theaters in Los Angeles and New York February 5th, before hitting VOD February 9th.

Three weeks seems like a terribly long wait.  Check out the trailer in the meantime: