When everyone is connected, no one is safe. 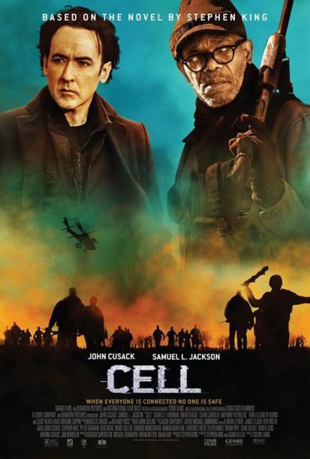 Hey, Stephen King fans! Have you been craving a new book-to-film adaptation? Are you simultaneously disturbed by how modern technology has wormed its way into our daily existence to the point where we’re absolutely dependent on it? If so, you’re in luck!

Cell, based on the 2006 novel by King, now has an official trailer, a poster, and–wait for it– a release date.  The film adaptation, directed by Tod Williams, was co-written by King and Adam Alleca, and stars Samuel L. Jackson, John Cusack, Isabelle Fuhrman, Catherine Dyer, and Stacy Keach.

Here’s what Cell is all about:

Clay Riddell, a New England artist, is a witness to an ugly phenomenon: a mysterious signal broadcast over the global cell phone network turns the majority of his fellow humans into mindless, vicious animals. Now he and a few survivors must find and stop ‘the pulse’ and the person controlling it and reunite with his young son before it’s too late.

The trailer looks fantastic and chaotic, and features explosions, zombies, and a gun-toting Samuel L. Jackson.  Cell hits video on demand this year, on June 10th.  Check out the trailer below!