Every night you stay, we’ll be watching you. 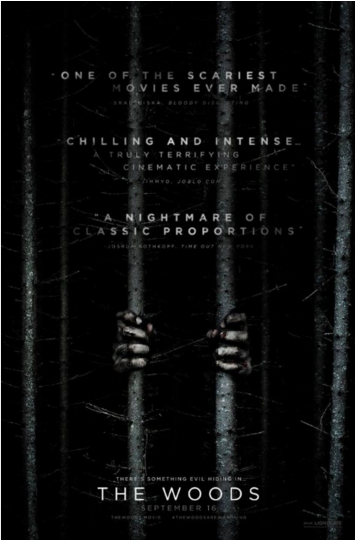 Have you heard of nyctohylophobia? It’s the fear of dark, wooded areas or forests at night.  Pretty rational fear, right?  Think about it: you’re taking a walk in the woods, and you realize you’re a bit lost.  You try to retrace your steps, but you haven’t been paying close enough attention to your surroundings, and you end up walking in circles.  Night is beginning to fall.  Your cell phone’s battery is running low and you don’t have a flashlight.  It’s getting darker and darker.  And you can’t be sure, but you’re fairly positive you’re being watched and possibly also followed.

Adam Wingard’s upcoming horror titled The Woods is bringing nyctohylophobia to a visceral and cinematic level.  Written by Simon Barrett, the film is about a group of college students who go camping, only to discover that they’re not alone in the titular woods.

I know, it sounds like The Blair Witch Project.  But the first trailer dropped this week, and trust me, The Woods looks terrifying in its own right.  Plus, it was directed and written by Wingard and Barrett, respectively.  They’re the filmmakers behind the “Tape 56” segment of V/H/S, “Phase 1 Clinical Trials” from V/H/S 2, and the segment “Q is For Quack” from The ABCs of Death.  Clearly the guys know how to get under our skin.