The episode starts out with a teenage girl on the phone with her friend.  She’s home alone and, in classic horror fashion, starts to hear noises coming from inside the house.  She thinks it’s her cat, and goes up to the attic to find it.  She succeeds, but also finds a masked killer in her house.  It’s revealed that it’s her best friend who’s come to kill her in retaliation for some slut-shaming comments.  Girl Number One is stabbed and thrown out of the attic window.  The cat does absolutely nothing because, well, it’s a cat. 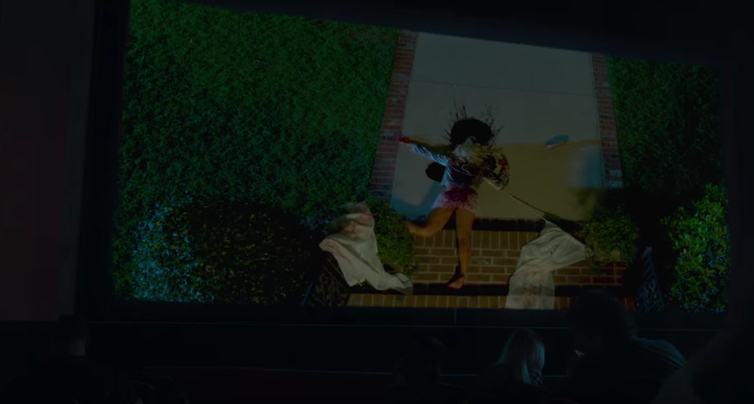 Not to worry though, because this stabby little exchange is only a scene in a newly released slasher movie.  And who’s in the theater watching it? Audrey! She’s an employee of Lakewood’s local cinema.  Her attention is diverted from the film to some incoming text messages on her phone.  They’re from an unknown number and have a sinister tone to them.  Suddenly, her BFF Noah calls her.  Evidently, she’s not super enthusiastic about her job, because she takes the phone call and talks to him, wondering if he was the one sending the texts as a joke.  It wasn’t; he’s just calling to offer a ride to Emma’s welcome home party.  Audrey accepts the offer, and later closes up the movie theater.  In the process of doing so, she meets a teenage fangirl who admires Audrey for her bravery (remember how she shot Piper and saved Emma last season?).  The two are then attacked by a knife-wielding and video camera-wearing assailant in a Brandon James mask.  The fangirl is stabbed and Audrey is cornered, while a helpless and locked-out Noah can only watch in horror and call the police.  Audrey grabs an ice pick from a display case and stabs her attacker. 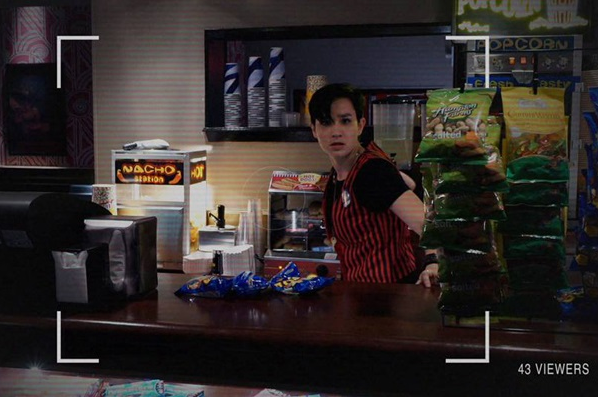 Plot twist: the fangirl and the attacker are working together to play a rather sick prank on Audrey.  The police come, the masked guy is taken away by EMS, and Audrey doesn’t get into any trouble because she acted in self defense.

About an hour or so later, the video of Audrey stabbing the prankster has gone viral, but there are more pressing matters at hand, namely Emma’s party.  It’s being held at Kieran’s house, even though he and Emma broke up a few months ago, and in attendance are him, Noah, Audrey, Brooke, and Jake.  All together, they form The Lakewood Six, a term dubbed by Noah for his podcast. They’ve all done guest interviews for it.  Well, everyone except for Emma, because she’s been in a psychiatric hospital.  More on that later.

Emma ends up spending the night at Kieran’s, shies away from hooking up, and ends up having a nightmare about a little girl playing with guts in a slaughterhouse. 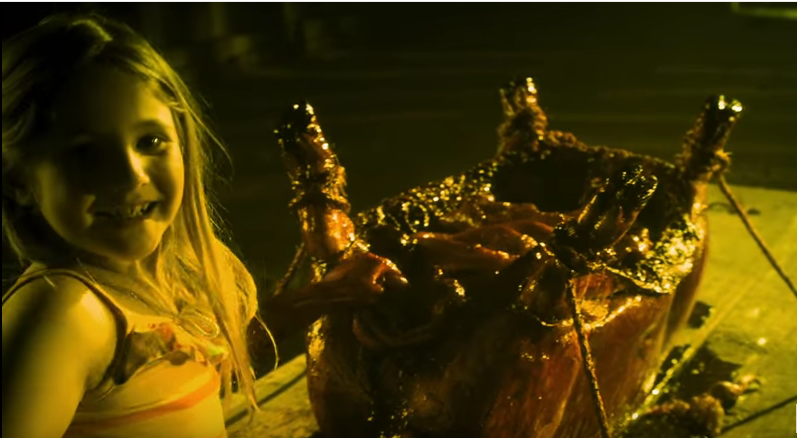 Meanwhile, Brooke and Jake are getting down and dirty in the school’s swimming pool.  Or, they are until Jake starts talking about how Brooke’s felonious father hates him and makes a disparaging reference about Brooke’s previous dalliance with her former teacher.  Brooke breaks up with him on the spot and goes home.  Jake, being the genius that he obviously is, drives out to some abandoned barn to do some grand gesture to show his love for Brooke and…is immediately attacked by a person in a Brandon James mask.  Seriously, do they sell those things in every convenience store in Lakewood or something? 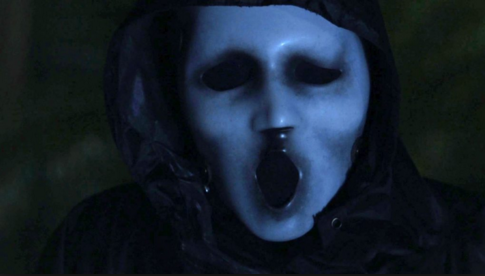 The next day at school, Emma, Brooke, and Noah have a psychology class together, where the overriding topic of the semester is dreams.  Appropriate.  Obviously, Noah can’t resist bringing horror movies, specifically A Nightmare on Elm Street, into the discussion.  There are three new characters who matter in this class: the teacher, a new guy who isn’t happy with Noah’s horror movie connection, and a girl named Zoe, who agrees to be Emma’s study buddy…and who also makes computer drawings of Emma’s face with blood on it.  It’s also revealed that Emma had some sort of breakdown a few months prior.  Who knew that witnessing a bunch of murders and almost being a victim yourself would have such a profound effect on someone? 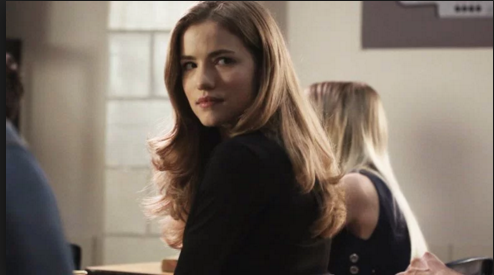 Speaking of blood, Jake is trapped in a barn, has a steel bear trap around his ankle, and has various weapons in his reach to help get him out of his predicament.  It’s reminiscent of Saw in the best way possible. 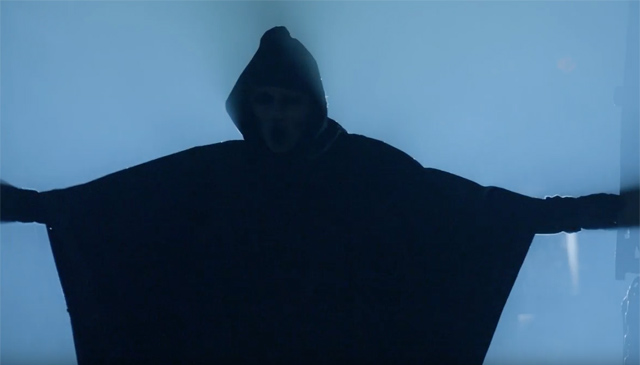 Back at school, Audrey receives more threatening text messages.  Noah drags her to the police precinct and tries to convince her to lodge a formal complaint and get an investigation going.  Ultimately, she decides not to press charges.  Noah has launched an investigation of his own.  He thinks that the person texting Audrey is the same person who has been leaving negative comments on the viral video of Audrey stabbing the guy who pranked her at the movie theater.  He hypothesizes that this person is, or is connected to, Piper’s unknown accomplice.  Or, unknown to him, anyway.  We all know that Piper’s accomplice was, in fact, Audrey.  At least for the first murder.

Jake somehow manages to get the bear trap off and breaks the lock on the barn door to escape.  Unfortunately, the newest person to don the Brandon James mask is right outside the door.  The assailant hangs Jake by the feet and disembowels him with a scythe. 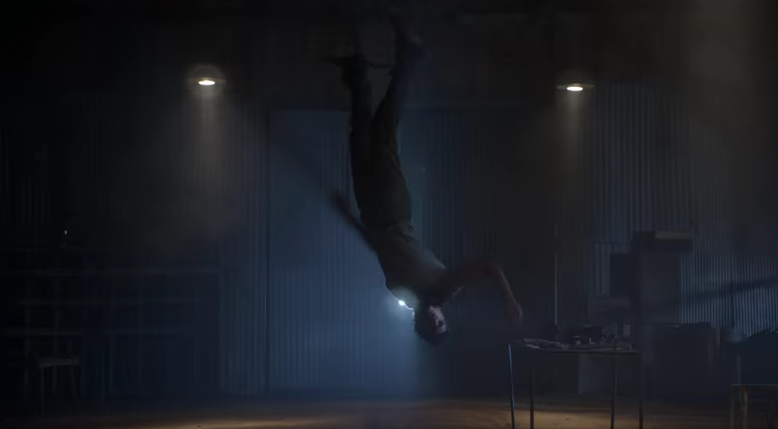 At the movie theater, Audrey receives even more threatening messages from her stalker.  She even finds photocopies of the letters she had sent to Piper before the murders took place.  Uh oh, Audrey.  Someone knows everything that you did.  And soon, we’ll all know the gory, unsavory details. 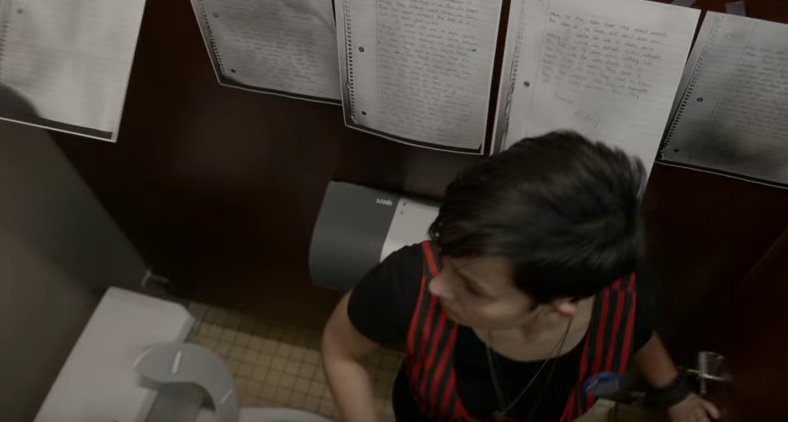 Emma tries to make progress with her healing process by doing an interview for Noah’s podcast.  After she’s done, she notices a picture of a barn/slaughterhouse on Noah’s investigation board.  It’s the one from her dream.  Noah tells her that it belongs to Brandon James’ brother, Troy. Emma goes there, enters his house… and finds dozens of childhood pictures of her and her mother.  And also the new masked killer. 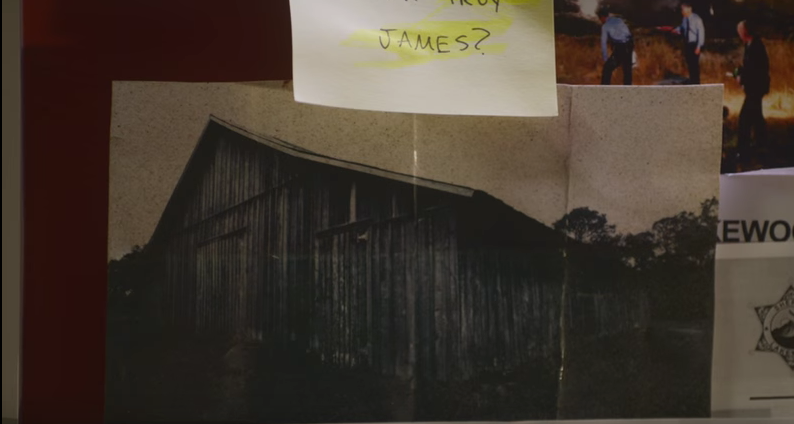