Miss Scream last night? Chill.  We got you covered. 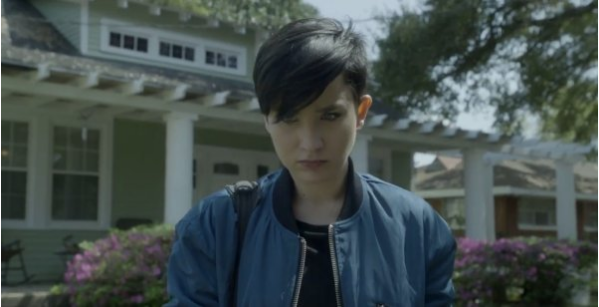 This episode of Scream opens with Audrey finding Jake’s corpse in the Motel’s storage unit with a note addressed to her tacked onto it. She gets a call from her stalker and decides that her best course of action would be to take the note and run away from the crime scene.  Smart move, Audrey.

Meanwhile, Emma tells her mom that her dad, Kevin, is back in town, and calls her BFF Audrey the next morning to process her feelings about it.  Audrey reminds her that Kevin is damaged and did that classic move of abandoning his child after the divorce.  Emma isn’t ready for the truth bomb and goes to breakfast with her dad, who is nervous, twitchy, and tells Emma two things: Maggie told him not to contact Emma since she had a breakdown, and he doesn’t have a good answer for why he disappeared from her life.  Emma leaves him at the café, and calls out her mom for keeping more information from her.

During all of this, Noah drags Audrey to the storage unit to find…absolutely nothing of value.  The body has been cleared and all that remains are old pieces of furniture.  And a security camera, which Noah cheerfully takes to watch, thinking he’ll find some more clues.  Audrey looks sick.  Probably because she has an idea of who is on the tape…

Later at school, Brooke rehearses for a pageant and tries to get in touch with Jake, progressing from text messages to voicemails.  So retro.  Emma gives Kieran the 411 about her dad’s reemergence, and shows his weirdo cousin Eli around the school.  The two have a sort of bonding moment over absentee fathers.

In the meantime, Noah brings Audrey home with him to see what’s on the security tape.  After a few agonizing moments of the tape syncing to Noah’s laptop, Audrey weighs her options and figures that the best course of action would be to smash Noah’s laptop with his very heavy (and very cool) dragon bookend.  Don’t worry, though.  No digital carnage occurs because someone erased the tape.  Audrey quickly leaves to go to school, and received a video on her cell phone showing her taking the note off of Jake’s dead body.  Three guesses as to who sent it.

Kevin shows up at Maggie’s house and the two argue about what’s best forher daughter.  He reveals that he’s been getting emails from Emma’s friend Riley about what’s been going on.  One issue though: Piper murdered Riley months ago.

Back at school, Brooke is beginning to form a friendship with Zoe, when her cellphone rings, displaying an unknown number.  It’s not the killer– it’s Branson.  Her creepy ex-boyfriend slash ex-teacher.  He misses her.  She’s totally not having it.  She does what we all do in these situations: she pulls her girlfriends Emma and Audrey into the ladies room to consult with them.  Audrey, stressed out, lets the cat out of the bag regarding Emma’s dad.  Then she leaves in a huff because she has her own drama to deal with.

Maggie and Kevin go to the police to report the emails coming from Riley’s account.  There’s nothing that can really be done about it, and they continue to argue in the precinct.  During the argument, Kevin grabs Maggie’s arm to try to stop her from leaving.  Bad move. In general, but definitely in a police precinct.

At the café, Emma asks for her work schedule, and her coworker tells her there’s a message from Kevin, saying he’s staying in the motel.

At the motel that night, Eddie receives a delivery from a liquor store (a bottle of wine and a corkscrew) for Kevin, and goes to his room to drop it off.  The door is ajar, and Eddie ventures in.  He finds the room covered in plastic and devoid of people.  Or so he thinks.  He walks into the bathroom, and the masked killer emerges from one of the plastic tarps.  Eddie is then brutally stabbed to death with the corkscrew.

As Audrey gets ready for work, she gets a call from the killer telling her to meet him at the motel or else he’ll leak the incriminating tape.  That night, Brooke and Zoe meet up with Noah at the movie theater.  Brooke is trying to get Noah to ask out Zoe since she has a crush on him.  Also at the movie theater is their classmate Gustavo, who warns Noah that he’s going to get himself killed looking for the murderer’s accomplice.  They’re all about to join forces when Brooke sees Branson.  She tells him, in no uncertain terms, that they are never, ever, ever getting back together.  He tells her that he left flowers on her car.  She texts Jake again and shoots him a break up message.  She finally gets a text back, saying “k babe. Hasta la vista.” Obviously the killer has no regard for her feelings.

Emma goes to the motel to meet up with Kevin.  Since the clerk isn’t there (since he was just murdered), she looks at the guest book and finds her dad’s name and room number.  She goes up to find an empty, immaculate room…with newspaper clippings of her and Maggie on the dresser.

As she’s driving to the motel, Audrey gets a series of phone calls.  One is from Noah, who’s wondering why she’s not at work.  She brushes him off and says that it’s a secret and “If I tell you, then I’ll have to kill you.” The next one is from the killer, of course.  He also sends her a video of Emma in the motel room, and him in the bathroom with Eddie’s bloody corpse.  While watching it, Audrey almost gets into what would surely be a horrendous car accident because watching a video while driving is a really bad idea. Audrey calls Emma to tell her to leave, but Emma ignores the call because she’s still mad at her.  In a panic over the prospect of losing her, Audrey makes an anonymous 911 call, telling them they need to send a squad car over to the motel.  Emma is about to check out the bathroom when she hears a noise outside and leaves.  It’s some drunk guy yelling at a woman who is either a date or a “date”.  She leaves the motel and walks down the block to find her father outside a bar and in an intoxicated rage, beating someone up.  Audrey pulls up and is relieved to see that her best friend is safe, albeit horrified to discover that her father is a mean drunk.

Emma confronts her father about the newspaper clippings, and he’s so out of it he doesn’t know what she’s saying.  He tells her that he checked out of the hotel and packed up his car.  Yup, that’s right: he was about to split without a word or a trace. Again.  He also confesses to Emma that when she was a little girl, he got drunk and tried to take her for a drive, Maggie stopped him, and he hit her.  He tries to blame his alcoholism and violence on his trauma, but Emma is too smart for that.  The police arrive and arrest Kevin.  Audrey lies to Emma and says that she called the police because of the fight, and didn’t realize it was her dad.  Emma’s not mad though.  She’s realized that her dad is an irredeemable POS.

Back in her car, Audrey gets a text from the killer with a closeup of Eddie’s bloodied up face and instructions to look under her seat.  She does, and finds the bloody corkscrew.