Too busy watching the new season of Orange is the New Black to see Scream? We get it.  Here’s what went down: 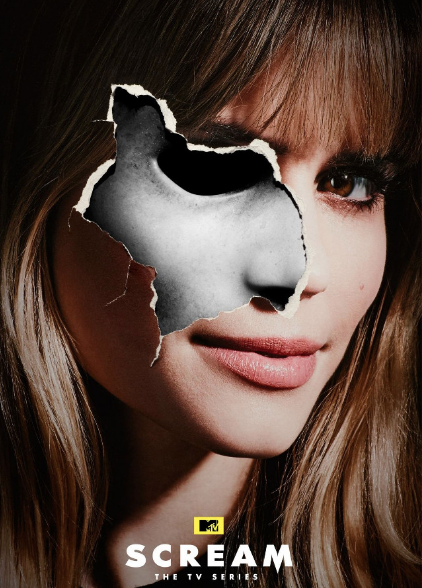 Last night’s episode of Scream was fairly straightforward, so let’s just dive right in.  The episode starts with Audrey burying the bloody corkscrew that the killer left under her car seat, taking care to wipe off her fingerprints (which actually may not be as effective as once thought…).  We switch over to Emma, who’s getting it on with Kieran.  Suddenly the murderer appears and kills him! Emma is also about to die when it’s revealed that it was just a dream.  Emma records it in her dream journal.  She’s not the only one who had an unsettling start to her day; Audrey wakes up to a phone call from the killer and…the corkscrew in her bed.  And her bedroom window wide open.

Emma sends a “happy birthday” text to Kieran, and walks downstairs to find her parents fighting.  Emma is so not in the mood to deal with this right now, so she tells her dad, Kevin, that he’s a horrible father, and tells her mom, Maggie, that she needs to stop keeping secrets from her.  At Kieran’s house, Eli comes in after apparently being out all night, and asks Kieran if he has birthday plans.  Kieran tells him that he and Emma have a quiet night planned together.  Alone.

Emma runs into Eli at the café where she works.  He’s filling out an application and tells her that even though Kieran said he wanted to spend his birthday alone with her, he actually wants a party.  Emma, for whatever reason, believes him and feels like the worst girlfriend ever for not planning an elaborate celebration.

At school, Emma joins forces with Brooke and Audrey during study hall to throw together a last-minute surprise party for Kieran.  Audrey gets a text from the killer and catches Stavo staring at her.  So she does the most reasonable thing she could do: pull the fire alarm and use the opportunity and empty classroom to go through Stavo’s belongings.  She doesn’t find any weapons, but she does find drawings of her, Noah, Brooke, and Emma.  Emma’s portrait features her with a knife going through her skull.

Meanwhile, out of the realm of high school, Brooke’s creepy dad, Mayor Maddox, does a grand total of two things: he strongly implies to Brooke that she will win the upcoming pageant, and he coerces the sheriff, Stavo’s dad, to locate Jake.

That night, Emma prepares her house to be the location of Kieran’s illicit and chaperone-free surprise party.  Eli helps her decorate and the two have a sort-of moment where they almost kiss.  Brooke comes in, Eli goes out to the car to get plastic cups, and Emma tries to quickly process her feelings about almost kissing her boyfriend’s cousin.  Eli reappears holding a bottle of expensive tequila that someone had left on Emma’s porch.  There’s a note signed by Jake attached to it, saying that he’s in Mexico with his parents.  Of course, we know that he isn’t; he’s dead.  But it’s okay, because Emma and her friends are too smart to drink anything that they didn’t buy themselves, and they’re too smart to fall for the old ‘tequila on the porch’ trick.

Except they’re not.  They’re idiot teenagers.  When the party is in full swing, Stavo passes out shots of this mystery tequila to everyone in attendance.  Brooke mentions, in passing to Audrey, that Jake is responsible for the tequila.  Alarm bells immediately go off in her mind, and for good reason: everyone starts puking and Stavo says that the tequila smelled like ayahuasca, which, if you don’t know, is a psychedelic brew used in spiritual ceremonies.  Surprise!

Everyone at the party starts tripping their brains out and seeing different things.

Brooke has a fragmented conversation with Jake, while she’s being attended to by Stavo, who has done ayahuasca before.

For Kieran, time is slowing down and he’s absolutely not into it.  He rambles on to Emma about his cousin and tells her that Eli may or may not have killed his neighbor’s dog.

Audrey sees Rachel– her girlfriend from last season who was killed by Piper.  Rachel even still has a noose around her neck.  The two start to kiss before it’s revealed that Audrey is actually kissing Noah.  They break away, but Noah’s date, Zoe, is, like, totally digging this vibe, and they have a drug-fueled three-way make-out sesh.  It’s a classic situation, really.

Emma, on the other hand, is having a really bad trip.  She goes out into the woods, sees herself as a little girl, and is chased by the masked killer.  Someone grabs her, but it turns out to be Kevin– someone called him over to the house.

The sheriff arrives and now has to deal with a bunch of teenagers coming down from ayahuasca.  No one has a clear idea of what was happening that night because psychedelics have a tendency to distort your sense of reality.  The sheriff also can’t believe that they were all stupid enough to drink something that was left on the porch by an unknown party.  During the questioning and report, Audrey tells the sheriff that his son has some pretty disturbing drawings.

At Casa de Stavo, the sheriff goes through his son’s belongings and art, and finds a Brandon James mask.  Yikes.

The next day at school, Noah tries to process kissing his best friend and his crush on the same night.  Audrey doesn’t want to talk about it, and Zoe tells him that he needs to figure out his feelings for Audrey.  Fair enough.

In the auditorium, finalists for the pageant are called up.  Among the Chosen are Zoe and Brooke.  When they’re up on stage, a banner unfurls from the ceiling, letting loose a generous amount of blood and Jake’s dead, disemboweled body.  The blood falls directly on Brooke, in a conscious tribute to Carrie.