Camping in the deep, dark woods and didn’t want to waste your cell phone data live streaming Scream? Here’s every last detail of the episode: 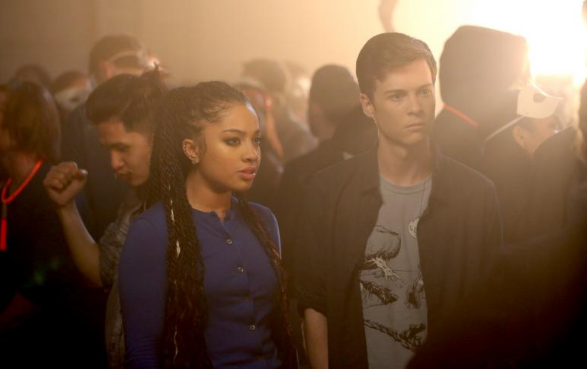 The episode begins with a journey into Emma’s mind– specifically her dreams.  She’s having a stress-induced nightmare brought on by almost killing her boyfriend and hearing an audio recording of Audrey recounting her short history with Piper.  In her dream, Emma stabs Audrey, Noah, and Kieran.  As it turns out, this isn’t just your run-of-the-mill nightmare; Emma has sleep walked into her kitchen and is holding a knife.  Luckily, Maggie manages to snap her out of it.

That morning, Sheriff Acosta discovers that Stavo isn’t in his bedroom.  He went to Brooke’s house the night before and didn’t bother going home.  Brooke wakes up, dreadfully hungover, and advises Stavo to sneak out the window before her dad finds him in there.  Brooke goes to take a shower, and when she’s gone, Stavo steals a tube of her lipstick.

At school, Emma commiserates with Kieran and Brooke about Audrey and Noah’s betrayal.   They’re all angry, and it looks like no one is willing to forgive either of them.  Emma confronts Noah about the recording and shows him the anonymous email that it was attached to. He swears he didn’t send it to her, and vows to track down the person who did.  Audrey tries to talk to Emma, but is shut down.  Emma is livid and pushes Audrey into a locker.  Later, at her own locker, Emma discovers that someone has hung a long lock of hair and one of Miss Lang’s tapes labeled “Emma” inside.  On her locker mirror is the message “Play Me” written in pink lipstick.

In an empty classroom, Audrey grills Noah about the recording.  He swears up and down that he didn’t send it to Emma and furthermore, didn’t know he was recording the conversation.  Audrey thinks that Zoe must have been the one to send it– after all, she’s the only person who’s been in Noah’s bedroom, besides Audrey, Emma, and Noah’s mom.  Noah is sure that Zoe wouldn’t do that (except she totally did, because she’s jealous of Noah and Audrey’s friendship).

Emma and Kieran decide to leave school six hours early.  In Emma’s house, they play the recording. It’s that time Emma vaguely threatened Miss Lang and told her to give her space.  In the tape, Miss Lang characterizes Emma as violent and unstable, citing the fight that she had with Hayley.  Emma is horrified, and wonders if she really is “violent and unstable.”  Also in the recording, Miss Lang mentions that she “needs” Emma.

Evidently, Audrey and Noah left school early as well, because the two are doing some detective work in Noah’s room.  Noah is still trying to convince Audrey, and himself, that Zoe didn’t leak the file.  Noah even invites Zoe over.  Zoe swears she had nothing to do with it, and even pretends not to know what Audrey and Noah are talking about.  Audrey tells her that she knows Zoe sent it to cause a rift between her and Noah.  Yup, Audrey read Zoe like a book.  Noah looks into the “sent” folder on his computer, and finds that Zoe sent the recording to herself.  Zoe admits to it. Kind of.  She says that she loves Noah’s podcast and wanted to listen to the next episode, but deleted it after she listened to it.  Audrey can smell that BS from a mile away.

Meanwhile, at the precinct, Acosta is looking at more of his son’s murder-themed art.  Maggie comes in with the news that she identified Eddie’s charred remains.   Acosta shows her Stavo’s drawings, and tells her that back in Phoenix (his hometown), Stavo and his friend were playing with a gun after Stavo’s mother died, and his friend was accidentally shot in the face.  Stavo called for an ambulance, but when they got there, he was calmly drawing his friend bleeding to death.  There had been a question about how long Stavo had waited to call for help.

Kieran and Emma go to the hospital to talk to Miss Lang.  A nurse tells them that she’s sedated but lucid, and will be happy to see her students.  Apparently, Miss Lang isn’t so happy to see them: when she sees Emma’s face, she starts screaming.

As the two exit the hospital, they notice that a bouquet of daisies has been delivered for Miss Lang.  Emma remembers that Brandon James used to call her mother “Daisy”, and she and Kieran decide to look at the card.  It reads “To Krissy (Miss Lang’s first name), Feel better, From Piper.”  Kieran steals Miss Lang’s keys from her hospital room.

Back at Noah’s, Audrey is still convinced that Zoe sent Emma the recording.  Noah tracks down the ISP address of the sender of the email, and finds that the sender has registered in Zoe’s name.  Zoe says (again) that she didn’t send the email.  Noah, surprisingly, believes her and tells Audrey to back off.  Audrey storms out to figure out how to repair her relationship with Emma.  Now that they’re alone, Noah and Zoe finally have sex.  Since this is a horror show, this new development can only mean one thing: Noah is no longer a virgin and, therefore, will probably be murdered.

Stavo, the scofflaw, sneaks into his father’s office at the precinct and looks through his files.  Specifically the crime scene photos.  He also discovers his own art has been included in the investigation.  He also finds a screenshot of some texts found on Jake’s phone.  He takes a picture.

Speaking of scofflaws, Emma and Kieran search Miss Lang’s house and discover a photo hanging upside down on her wall.  It’s a group photo, featuring her and Piper sitting together.  Turns out, the two were childhood friends.

Noah and Zoe enjoy some post-coital murder talk.  Noah wants to know why Zoe is now involved in the Lakewood Six’s newest torment and has the sickening realization that the camera that he stole from that storage unit is bugged.  The killer has been listening to the happenings in Noah’s room the whole time.

Back at Miss Lang’s house, Emma realizes that the photo was taken at a group foster home (Blessed Sisters Children’s Home) that was notoriously shut down after an abuse scandal.  Kieran and Emma call Noah, and he and Zoe agree to meet up with them at the children’s home.

Stavo sneaks into Brooke’s bedroom again, and shows her the photographs of Jake’s text messages.  Long story short, Brooke’s dad had paid him to burn down one of his model homes, and that’s where the killer found Jake.  Brooke angrily confronts her dad about this.  His only concern (other than his rapidly deteriorating relationship with his daughter) is how Brooke saw those texts.

Meanwhile, Audrey is typing and re-typing an apology letter to Emma when she gets a call from the killer.  He taunts her about Noah making his sexual debut and tells her that he’s fair game.  He texts her the address where he’s going to slaughter her best friend.

Emma, Kieran, Noah, and Zoe arrive at the Blessed Sisters Children’s Home to discover that a rave is happening and every Lakewood teen is there.  Apparently someone (the killer) organized the party, instated a “masked” theme, and sent everyone invitations proclaiming that Audrey and Emma were co-hosting.  Audrey, driving at breakneck speed, tries to call Noah.  It rolls to voicemail.

Luckily, Emma, Kieran, Noah, and Zoe are smart-ish kids and know exactly what’s going on.  They split up to try to kill the party.  Zoe and Noah try to find the fuse box to turn off the lights and music, Kieran calls the police to report underage drinking, and Emma confronts Hayley, who is giving out masks.  Hayley tells Emma that a “mystery friend” asked her to help out.  Emma tells her that the killer arranged the party, and Hayley tells her that she’s being paranoid.  The “mystery friend” is someone that she’s been seeing.  Hayley goes into a back room to get more supplies, and is cornered by someone in a Brandon James mask.  This is the person Hayley’s been seeing, and she starts to flirt with them.  Suddenly, this person stabs her repeatedly.

Emma starts looking around for clues and runs into Audrey.  She’s still angry, but there are more important things right now, like trying to prevent their friends’ deaths.  Suddenly, the power goes out (Noah and Zoe found the fuse box).  Emma gets a text from the killer, threatening Kieran’s life; Audrey gets one threatening Noah’s.  The two start poking around the building looking for them.  Instead, they find photo’s of Piper mounted on the walls and…Piper’s corpse propped up on a chair.  Elsewhere, Stavo roams the party alone.

The police come and break up the party.  Emma and Audrey realize that the killer wanted the two of them to find Piper’s body together, since they were both responsible for her death.  Acosta approaches them and tells them that he knows they didn’t throw the party.  Emma tells him to talk to Hayley since she seems to be in the know.  Another officer finds Acosta and tells him that “there’s something he needs to see.”  It’s Hayley’s dead, bloody body hanging from the ceiling.

In another part of town, Stavo meets Brooke in a hotel room.