Scream Episode 2×12: ‘When A Stranger Calls’

Too busy playing late-night Pokémon Go to watch the Scream finale? It’s an acceptable excuse. Here’s a recap of all the craziness that went down: 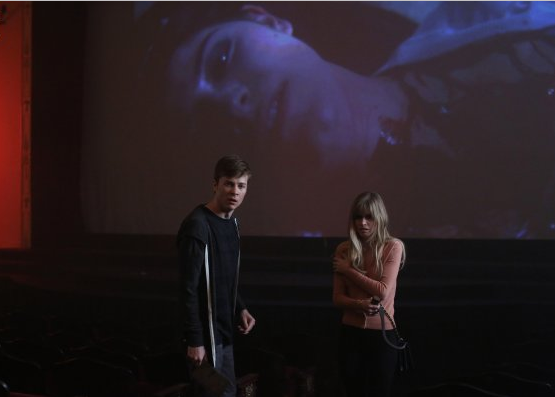 Last week on Scream, Emma and Audrey were caught red-handed with Mayor Maddox’s bloody body.  Now, they’re in the back of a police car, being driven to the precinct to be interrogated.  Unfortunately, the officer driving them isn’t the most focused– he takes his eyes off the road for a split second and nearly runs over the masked killer.  The officer swerves and rams into a telephone pole.  When he exits the totaled vehicle, the killer overpowers him and stabs him to death before opening the door to the back seat where Emma and Audrey are.  He doesn’t hurt them– he tosses them the keys to their handcuffs and goes on his merry way.  The two escape and take the fallen officer’s gun.

The next morning, it’s revealed that the two girls are on the lam.  They stop at a roadside convenience store.  The cashier gets a phone call and asks if either of them are Emma.  Emma takes the call; it’s the killer.  He tells her that if she and Audrey turn themselves in or get caught, he’ll kill someone that they love.

Back in the Lakeview hospital, Miss Lang tells Sheriff Acosta that she believes that Audrey and Emma are both suffering from post-traumatic stress-induced psychosis, and that they’re both feeding into each other’s delusions.

Across town, Brooke is unnervingly calm about her father’s murder.  Stavo comes by and tells her that he suspects that Audrey might be the killer.  After all, he did see the video of her with Jake’s body.  Brooke, however, isn’t buying it.  She maintains that her friends are innocent.

Emma and Audrey sneak off the Kieran’s house.  Only Emma goes in, leaving Audrey outside as a lookout.  She fills in her boyfriend about the latest details and phone call, and then makes her escape out the window.  Just in time, too, because Eli barges in Kieran’s room.  He says that the police had been questioning him all night.  Kieran confronts him about his presence at Will’s funeral, and tells him to stay away from Emma.  Eli doesn’t care about Kieran’s warning; he tells his cousin that he isn’t afraid of him, and that he’ll do whatever he wants.

Downtown, Audrey leads Emma to the movie theater where she used to work, and unlocks the back door with a key that she had stashed.  She explains that the theater won’t be open until five.

Brooke goes to see Noah at the hospital.  News bulletins displaying photos of Emma and Audrey play over and over on the TV.  Noah gets a call from an unknown number and answers it.  For once, it’s not the killer; it’s Emma calling from the theater.  Brooke and Noah decide to leave the hospital to see their friends.

Meanwhile, the police are searching the Duvall house.  Maggie tries to convince Acosta that Emma isn’t a murderer.  The sheriff tells her that they found Emma’s dream journal in the pig farm, and that she’s the best lead they have.

At the movie theater, Emma, Audrey, Kieran, Noah, and Brooke meet up.  Emma gets a threatening call from the killer, but this time, Emma is prepared and confident.  She dares the killer to come for her.  She and her friends then arm themselves with replicas of slasher movie weapons (the theater has them on display), and prepare themselves for the impending showdown with the killer.

The team takes their positions.  Noah and Brooke guard the front doors, Emma and Audrey watch the backdoors, and Kieran is in charge of the side door.  Noah jokes about being the killer and “goes all meta” until he quickly tells Brooke that he’s innocent.  Suddenly, Stavo appears at the doors, asking to be let in.  Apparently, someone sent him a text from Brooke’s phone telling him to come to the movie theater.  They don’t let him in.

A scream is heard from the auditorium.  Emma runs there, leaving Audrey with the promise that she’ll be right back.  Noah, Brooke, and Kieran also go to the auditorium to find that the murder tapes are being projected on the big screen.  Emma rushes to the projection room, while Kieran runs to make sure Audrey is safe.  Emma turns off the projector, darkening the room.  Suddenly, the killer appears behind Brooke and stabs her in the stomach.  Emma fires her gun, but misses.  The killer escapes and Emma runs to try to find him.  Kieran and Noah put pressure on Brooke’s wound and call 911.  When the police arrive, all three encourage Emma to run off before she’s caught.  Audrey on the other hand, is missing.

Brooke is taken to the hospital and rushed into surgery.  Kieran gets a call from Emma, who tells him that she hasn’t heard from Audrey.  She’s freaking out, understandably so.  She blames herself for Brooke’s attack, and Kieran assures her that it’s not her fault.

In the waiting room, Stavo is also wracked with guilt.  He thinks that he should have forced his way into the theater– then, maybe, he would have been able to protect Brooke.  Noah tells Stavo that Brooke is tough and that she’ll be fine.  After all, she was stabbed and left in a freezer last year.  Stavo breaks down in tears at the prospect of losing Brooke, and his dad, who came to the hospital with Brooke, puts aside his frustration with his son and sits down with him.  Noah uses the opportunity to voice his suspicions about Eli.

Meanwhile, Emma gets a text from the killer.  It’s a photo of Audrey in the abandoned orphanage with the message “come alone or she dies.”  Emma drives over and decides to face the killer to save her friend.

When Emma enters the orphanage, she gets a call from Kieran.  She tells him that she can’t reveal her location and that she’s determined to end the killer’s rampage.  She also tells him that she loves him– the feeling is mutual.  Emma gets a call from the killer, who taunts her and tells her that she’ll never feel safe again.  Suddenly, the killer appears and cuts Emma’s arm.  She manages to escape with her gun (after firing a few unsuccessful shots).  She finds Audrey upstairs, unconscious, and chained to a radiator.

As Emma tries to wake up her friend, Kieran arrives.  He’s soon followed by Eli, who is holding a knife and bleeding heavily through his shirt.  Eli says that he followed Kieran to the orphanage– and that Kieran stabbed him.  He then tells Emma that Kieran was the one who was harassing that girl in Atlanta, and that Eli went to Will’s funeral to warn Emma and her friends about Kieran’s true nature.  Kieran predictably denies these claims and says that Eli probably stabbed himself.  Eli moves toward Kieran with the knife, and Emma shoots him once in the chest.  As Eli crumples to the ground, Kieran tells Emma that she and Audrey will “feel safe again.”

It’s almost exactly what the killer had said.

As Audrey wakes up, Emma has the sickening realization that the killer has been Kieran all along.  Eli starts to get up, and Kieran shoots him three more times, killing him.  He explains that he and Piper had met long before he had moved to Lakewood.  They had bonded over their parental abandonment issues and began an affair.  He says that Piper taught him that killing people was more fun than therapy.  Kieran tells Audrey and Emma that he had been torturing them because they had killed Piper.

Emma realizes that Kieran won’t be satisfied until he’s killed her, so she runs off, baiting him to chase her around the orphanage.  Kieran drags Audrey with him as he pursues her.  Emma manages to knock him off-balance, giving her and Audrey the upper hand.  Audrey traps Kieran with her chain and Emma points the gun to his head.  Audrey encourages Emma to shoot him, but she decides against it.  The police arrive and arrest Kieran.

We fast forward to a happier time.  Noah wraps up an episode of his podcast.  We see Brooke and Stavo spending time with Acosta, and see Stavo’s latest drawing: the survivors standing together on a bridge.  We see that Emma and Audrey’s friendship is stronger than ever, and we watch Miss Lang start to type up her book.

But we also see Maggie at the Boo Radley tree, and watch her discover that the note that she had left there is stained with blood and stuck to the tree with a knife.

We also see Kieran in jail accepting a call.  He’s told that it’s his lawyer, but the voice is distorted with that voice-changer app the killers have all used.

“Hello, Kieran,” the voice says.  “Who said you could use my mask?”

Is Brandon James alive after all? Are the killings in Lakewood over? Unfortunately, we don’t even know if Scream will be renewed for a third season.  We’ll keep our fingers crossed and let you know!