It’s a bit of an understatement that the nation has gone into zombie obsession mode. Between a handful of quality remakes, the introduction to the terrifying “running” zombies (Seriously guys, as if we didn’t have enough on our hands with the zombie apocolypse?!), and the slew of shows that are now on prime time television – we have truly become a zombie obsessed culture.

It’s enough to make you sick. No pun intended. We wouldn’t blame you if you’ve gotten a little fried on the whole zombie thing. I mean I knew they were cool way back in 1932 when I was watching White Zombie for the first time in 1991. So how do you think I feel?

Okay, okay, so maybe I’m over exaggerating a bit. But honestly, I fucking love zombies. And sometime when I’m starting to feel like zombies are getting a little over played – I think back to classic reason I love zombies so much. That’s right – the gruesome deaths at the hands of the undead.

So sit back and check out my picks for the top five ways zombies have killed over the years.
.

The “Never Have Kids” Method

(Night of the Living Dead)

A true classic and the first zombie film that really made me shit my pants. Is this one gory? No it surprises you the way that those other slow lumbering zombies outside your boarded up house can’t – “one of us” was a zombie.

And not just anyone. A little girl! You’d never suspect the littler girl to straight up stab her own mother with the pointiest trough shovel the world has ever seen. I mean seriously, check it out:

The “You DON’T kick ass for the lord” Method

Is there really anything better than seeing a priest who happens to know karate literally kick the arms and legs off of zombies in a cemetary while screaming, “I kick ass for the lord?”

Maybe not but I can give you a close second; that very same priest getting bit on the neck by a zombie head falling from the sky and then getting empaled by a very point finger on the top of a tombstone.

This all sounds confusing. Watch the video and the brilliance will all make sense:

If there’s one thing that’s worse than zombies it’s Nazi zombies. I mean, Hitler wanted to take over the world while he was alive – can you imagine what his undead minions would try to do?

Bite people in the dick, apparently.

2. The “Big Ass Splinter in Your Eye” Method.

I’ll admit that this one is getting a top spot on the list because I have a thing about getting your eyeballs all messed up. I mean they are so soft and exposed. On top of that I hate needles – and this scene is like a giant fucking wooden needle getting jabbed into your eye.
No literally. For some reason this Italian zombie isn’t satisfied with the classic munch/chomp/bite tactic. He wants to make her suffer first by slowly pushing her eye into a broken window frame:

(Day of the Dead)

Of all zombie deaths, this is the million dollar prize. A crowning achievement of special effects and full on gory nastiness. George Romero had already made the whole “watching your intestines get ripped out of your own stomache” thing cool in his pervious classic Dawn of the Dead – but in this sequel it’s so much more fully realized.

The real kicker that makes this the best zombie death? It all starts because a zombie shoots him with a gun. You see kids, zombies don’t kill people; zombies with guns kill people.

Who am I kidding. Zombies kill people with or without guns. You go zombies! 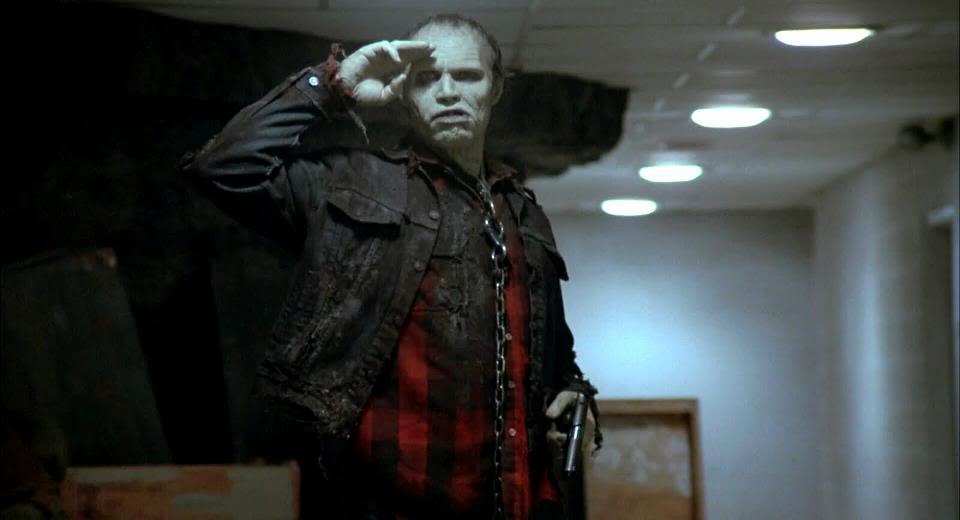