What’s The Price Of Fame?

Excited to see more of our top horror film of 2014?  Starry Eyes is coming to DVD and Blu-Ray and it’s packed with some special features that we’re actually excited to check out.  Seriously, these special features look cool – 10 deleted scenes, and Alex Essoe’s actual film audition – I mean how great was that audition scene in the movie?  Must see.

According to the Starry Eyes official site:

On February 3rd Starry Eyes hits DVD, Blu-ray and Digital Download from MPI Home Video. The release will have new artwork on the cover, but will feature the award-winning retro artwork cover from Jay Shaw on the inside, as a reverisble slip! 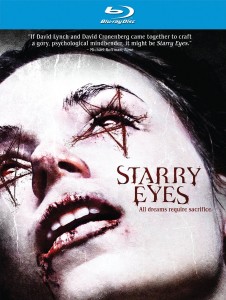 Now how about some bonus features?

The DVD and Blu-ray are available for pre-order all over the place, but you can grab it from Amazon here!