With all of this insane excitement buzzing around the internet about Neill Blomkamp’s fifth Alien movie; I just can’t help but think back to all of my personal memories watching the Alien franchise for the first time.

Strangely, I find myself recalling one film in particular more than the others – and I’m not talking about the classic space horror Alien or action bombast of Aliens. I’m talking about Resurrection. It’s the worst entry in the series for sure, but to me it will always have one of the scariest scenes out of the entire series. Maybe even one of the most scarring scenes I have ever seen.

I’m sure you all know the one; where Ripley discovers all the failed clones that came before her. The twisted, deformed, and just down right unnatural affronts to human nature brought to painfully realistic detail on the screen by some amazing special effects. 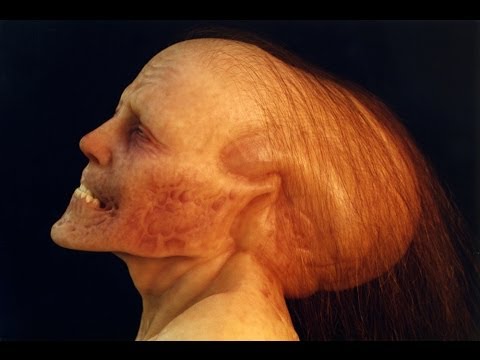 And then there’s the real kicker – Ripley walking up to a still living deformed clone; writhing in pain and begging to be killed. It’s a truly disturbing scene in an otherwise muddled and often goofy fourth entry in the film.

So why does this scene stand out so much? Maybe because it represents the darkest and most detached side of humanity. The detached part of us that will go to any disgusting length in the name of science. It’s a visual representation of the stomach turning feeling you get when thinking about inhumane testing and the complete destruction of a living thing’s right to a real life. The fear inside the deformed Ripley’s eyes looks real; looks relatable; looks like us. But the rest of her body is a monster, bent, demented – you can basically feel the pain through her twisted movements.

You hardly see scenes like these in movies. Where the “shock” moments actually feel earned. When they actually feel real – not like fake puppets or rubber dolls. I’ll always remember the first time I saw that scene. I was at a friend’s house hanging out in his basement late at night. His family had HBO (a commodity in my group of friends) and we happened across Resurrection. Our eyes locked with the screen and our kid brains were suddenly exposed to the most fucked up images we had ever seen at the time.

I was terrified but I wouldn’t admit it. I kept it all in and pretended that the scene I just saw wasn’t going to give me nightmares. You know, because guys are “tough” like that. An hour or so later, I had to walk down the street back to my house. It was dark, I was alone, and my heart had never raced so hard from fear during a two block walk. I went into my bed and couldn’t sleep because if I closed my eyes I would see the horrible horrible images that were burned into my brain. I’ll never forget that day. I’ll never forget that scene. But sadly, I can easily forget the rest of the movie.

I hope Neil Blomkamp doesn’t forget to keep that deep seeded and sickening dread in the new film. I firmly believe the movie as a whole will be a blast – but I expect my Alien films to truly scare the shit out of me. So Neill, pop in some Resurrection, skip to that scene, and take some notes.

What do you guys think? Is this a truly masterful scene of terror or am I just a big baby? Let me know in the comments below or hit us up at the official HFC Facebook. You can also tweet at us @thehorrornews.