I’m going to start things off by making a broad statement: When horror meets outer space it’s almost always a recipe for disaster. And yeah, I know there are exceptions. Alien is probably one of the most suspenseful and terrifying movies out there – space or no space. But as a whole, if you take a horror premise into the stars you’re basically jumping the shark. The two genres are ridiculously over the top on their own. But where both usually bend separately – together they break.

And that’s why I love Event Horizon so much. Not only is this a scary movie in its own right, it’s a scary movie that really takes advantage of its surroundings – namely the vast emptiness of outer space. 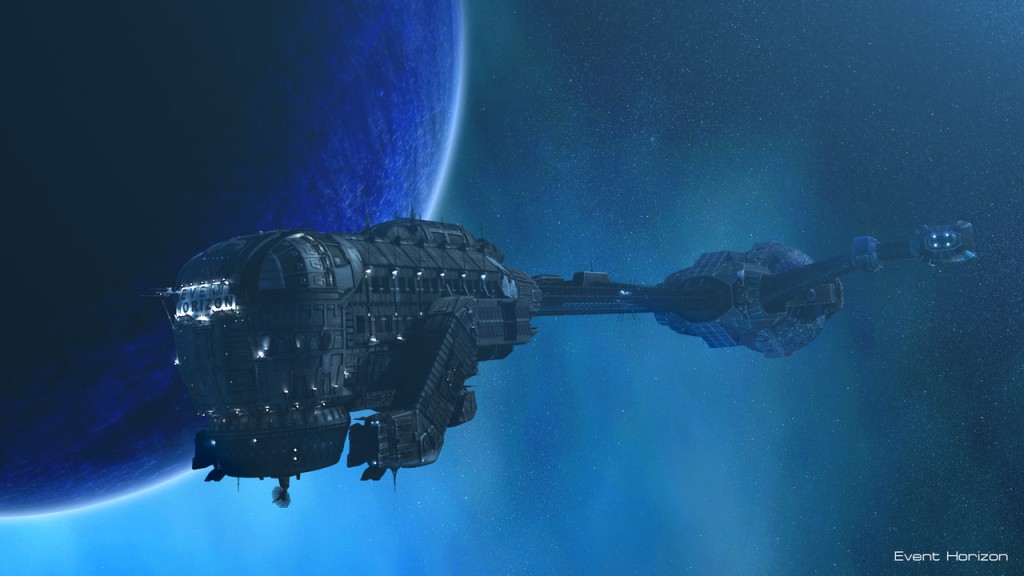 When the film first hit the theaters back in 1997 it was critically panned, considered too dumb and too violent. You know, what you’d normally expect from space-horror. Even in retrospect, critics have a hard time accepting the movie as anywhere close to good.

One critic, David Keyes from Cinemaphile.org, went as far to say:

“If I were a psychologist hired to analyze the people who made this, I would conclude that everyone involved needed to take their inner child out back and shoot it.”

But whoa, whoa, whoa – slow down! Why all this hate? Surely it’s not that bad. I mean, even if you grade this on a curve compared to the rest of Paul W.S. Anderson’s films that followed. This is far better than any of those.

I’ll admit, when I first saw this film I was pretty young. Heck, the only reason I watched it was because “that guy from Jurassic Park” (aka Sam Neil) starred in it. But this was NOT Jurassic Park. Sure, raptors are scary – but nowhere near as scary as the dozens of deformed and tortured bodies that littered Event Horizon.

And that’s the thing, everyone I talk to who has seen it was scared shitless by the movie. Of course, that doesn’t mean that it’s “good” but, man, there is definitely a huge cult fan base growing from the generation that grew up seeing it as young kiddos.

Yes, the negative criticism is warranted to a certain degree. Event Horizon sets up certain core ideas that make us believe we might get an insightful look into the psychology of existence, being, heaven, and hell. You know, the kind of stuff all outer space adventures try to tackle.

So no, Event Horizon does not tackle these issues very thoughtfully. But who the hell cares? Its number one goal is to scare the shit out of you. And it does. In abundance.

I mean, let’s talk about the most iconic scene from the film – the original space crew’s video log. You know the one. It all seems like a routine space log until we get intense flashes of the most grotesque horrors ever put to screen. Maybe I’m over exaggerating – but man that’s sure how it felt.

And that to me is the film’s greatest strength. It does indeed use incredibly violent images to try and shock you – but it also induces an incredible feeling of long term dread. How does it do this? By only showing the violence in quick flashes, Event Horizon implies that there are things far worse than what it’s showing. Things that we, as mere humans, cannot even imagine. It’s that concept of Hell that makes it so scary. This is a kind of terror and pain that you can never imagine in your waking life – and Event Horizon does a damn good job creating that feeling.

Has the movie’s effects aged? Yes. Is this film chock-full of inexcusably cheesy dialogue? Double yes. But I’ll tell you this: I’ve ignored far more offensive material in the search for a good scare – and Event Horizon doesn’t fail when it comes to those shocking moments of dread.

Give it another shot. Will you fall into the camp that fondly remembers its disgusting brilliance? Or walk out of the movie annoyed. If you do – feel free to come yell at me in the comments below.