Even the devil can’t bring this movie back to life.

There’s nothing worse than wasted potential. I sat down to watch The Lazarus Effect excited to see a film that would take into consideration the different view points of life and death. An argument of science vs an argument of faith if you will. You know, something I could really sink my teeth into. But The Lazarus Effect doesn’t really know what it wants to be. Is it a thought provoking horror sci-fi that questions some of our deepest questions and fears? Or is it a straight forward possession film that’s only goal is to make you scream like a little girl. The Lazarus Effect tries to be both and unfortunately ends up succeeding at neither.

The film’s premise is exciting enough. Scientists Frank (Mark Duplass) and Zoe (Olivia Wild) are trying to find a way to bring the dead back to life. No, they’re not mad scientists – they want to be able to give a “second chance” for surgeons and doctors dealing with patients in life-or-death situations. They end up succeeding, more or less, early into the plot – but the big question still remains: should the dead be brought back and is there something in the afterlife that comes back with them? 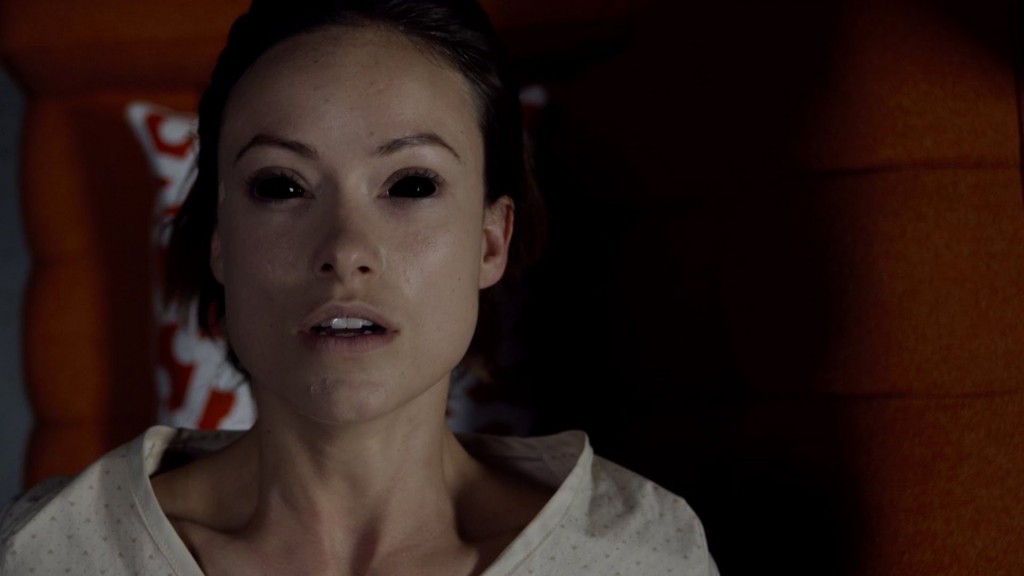 The most exciting idea behind this plot is the constant back and forth between science and faith. In the early phases, a dog brought back to life shows sudden signs of aggression and confusion. Is this because of some demonic force or a side effect of the extra brain activity from the remaining serum stuck in the dog’s brain? Are the “returned” subjects really gaining psychic power because of an evil force from the after life? Or have they accessed new aspects of their brain that should only be seen with thousands of years of evolution?

These are really cool questions that I really wanted to film to explore – but half way through a switch is flipped and all of these questions are wiped away. Forget about questions. Forget about philosophy. Let’s just get straight into violence, demons, and destruction. The worst part? None of the demonic moments in the second half register many scares. The visual style is surely crisp, cool, and nice to look at – but there is no suspense, no menace, and there are even some moments where it all comes off goofy. Don’t even get me started on the random love and conspiracy subplots that have no purpose whatsoever. Why are they there? They don’t even get a conclusion. Like I said, wasted potential.

I might be reaching here, but it all sort of turns into a horror version of 2014’s Lucy. What happens if a human being suddenly can use 100% of their brain? Both even get their powers because of some sort of drug! But here’s why I loved Lucy (ha) but didn’t enjoy this film – Lucy knows the whole “humans only use 10% of the brain” idea is downright silly. It just runs with it and turns it into a strange half philosophical wild ride. The Lazarus Effect doesn’t find this idea funny. It even tries to correct the misconception. Assistant scientists Niko (Donald Glover) and Clay (Evan Peters) let us all know that humans do use more than 10% of their brain – but can only use 10% at a time.

That very sentence, that very explanation, is the core of what makes The Lazarus Effect fail. That small distinction doesn’t make the 10% notion any less silly – so why be so serious? The movie takes great ideas (whether they based in fact or not) and remove all of the fun. It takes itself so seriously but doesn’t have the scares or the heavy ideas to back it up. It’s a lame duck. It doesn’t have balls. Without those essential factors the movie has no real soul to it – and without a soul this movie ends up feeling dead. The actors try their hardest with admirable performances but just like the serum in the film – it’s not enough to make this flick truly feel alive.

'The Lazarus Effect' Review: What Happens When We Play God?
'The Lazarus Effect' wastes all of the potential gained by its premise on lame scares and no menace - becoming nothing more than a boring and cliché possession flick.
Rating4
Pros
Cons
4Overall Score
Reader Rating: (3 Votes)
58%