Within the opening scene of It Follows I was absolutely floored. After seeing so many horror movies day in and day out – it can be easy to be jaded by the entire genre. But within mere minutes of watching It Follows, I was bombarded with a near perfect combination of style, atmosphere, sound, and tension. I felt like a kid in a candy shop – overwhelmed by the sheer awesomeness of what was being blasted at my eyes and ears. So for those of you who like to quickly scroll down to the bottom of the review just to see a number – I’ll save you a trip. This can quite possibly be one of the best horror movies of 2015.

A quick recap for those who don’t already know. It Follows focuses on a suburban teen named Jay (Maika Monroe) who has sex with her new boyfriend in his sweet bad ass car. But the whole “death to teens who have sex” trope gets taken to whole new level when she finds out she has caught something. Something worse than an STD. She has caught a curse that sends some… thing after her. It can look like anyone and all it does is walk towards her. If she gets caught – if it gets close enough to touch her – it’s game over. 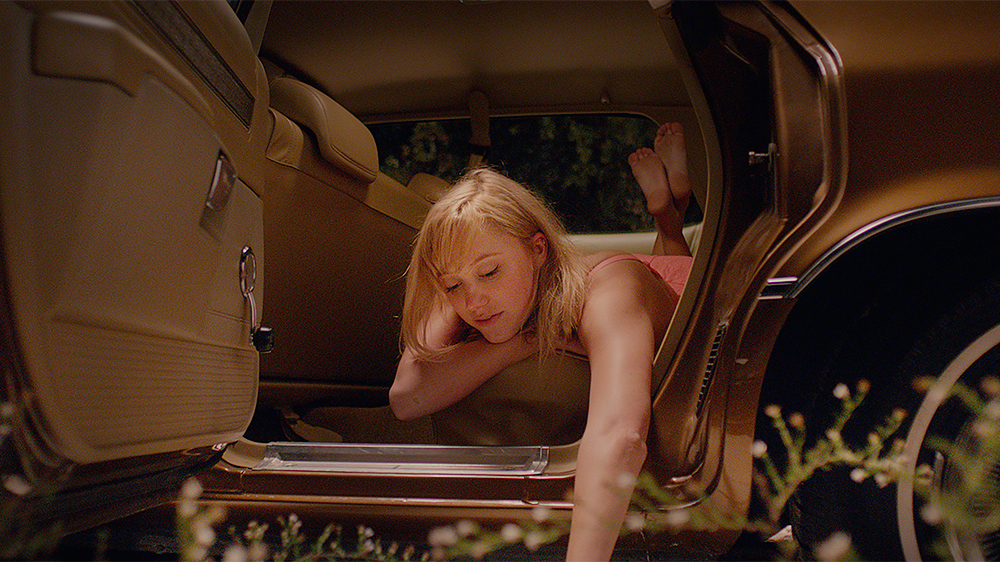 If I had to quickly describe It Follows I would say it’s the love child between John Carpenter’s Halloween and The Ring. But simplifying it down to such a description really doesn’t give the movie justice. This isn’t just fan service. It’s not lazily crossing two ideas into on slightly original new one. Director David Robert Mitchell takes his influences and pushes them one step further – creating a movie that at once feels classical and brand new at the same time. For anyone who has grown up in the suburbs, this movie captures that perfect mood – the listless waiting, the boredom, the stillness and then bashes it into pieces by introducing an unrelenting terrifying force. It takes place in the present but feels like a dreamland of the past 3 decades (Props to the crazy throwback shell eReader!). It feels timeless. Elevated beyond it’s own genre trappings.

Oh yeah, and that’s the best part – this movie is actually scary. Every single time “It” shows up to attack Jay the tension is insurmountable. It gets to the point where you no longer feel safe in any scene. You’ve been put through so much ratcheting trauma on sequence after another that you just can’t take it anymore. You’re psychologically battered just like the protagonist. It can show up at any moment. You’re watching the corners of the screen just like Jay is watching her back every chance she gets.

A large part of this constant fear is thanks to the fantastic soundtrack. Much like the rest of the film – it perfectly combines throwback 80’s synth sounds with its own bit of original personality. It’s loud. Its heart pounding. It’s in your face and I love it for that very reason.

The other reason the fear hits so hard? It’s all in the simple premise. Like I said from the beginning, Mitchell doesn’t try to reinvent the wheel here. He doesn’t try to over complicate the plot in order to find something brand new and original. He goes back to basics, strips everything down to a very simple premise, and let our natural fears take hold. Mitchell guides us with great skill through his talented team of cinematographers, composers, and editors – but that core fear has always remained inside us. Mitchell runs with that in sweet, sweet abandon and its oh-so-good. Real good. Fantastic.

You can probably already tell I’m in love with this movie. Just like the rest of people out there. I don’t want to over hype this. There’s nothing worse than too much hype. So let me just say that this movie is not perfect. A modern day classic? Maybe. But only time will tell. Like most horror movies, the third act starts to lose a little bit of its luster. It almost feels like the movie wrote itself into a corner and so suddenly pulls a random Hail Mary in the end that involves a pool and a ton of electronic appliances. It’s surely a cool scene – but totally random and messes up the pacing a little bit. The fear starts to fade a bit in favor of action and a climax. Luckily after a few tumbles It Follows is able to stick its landing. The final beat of the film perfectly encapsulates what makes the premise of the whole movie so terrifying. It leaves you on a perfect note – so any small problems that arise are cleansed. What you are left with is a tour de force of a horror flick that people will be talking about for the rest of the year.

Side note: Do you think if you wear a condom the curse gets passed on? Is latex powerful enough to prevent ghosts/monsters/whatever? These are important questions to ask people.

Does 'It Follows' Live Up to the Horror Masterpiece Hype?
'It Follows' lives up to the hype and then some. While not a perfect horror movie - it gets damn close with a blend of fantastic acting, directing, camerawork, and mood. A modern classic.
Rating9.5
Pros
Cons
9.5Overall Score
Reader Rating: (3 Votes)
33%