More casting news from Rob Zombie’s crowd-funded feature film 31! Jane Carr has joined the cast as Sister Serpent, “a wicked cross of Satan meets Mother Goose.” Carr has had a long career in film and TV since her debut in The Pride of Miss Jean Brodie opposite Maggie Smith, including roles in How I Met Your Mother, Phineas and Ferb, and Curb Your Enthusiasm. 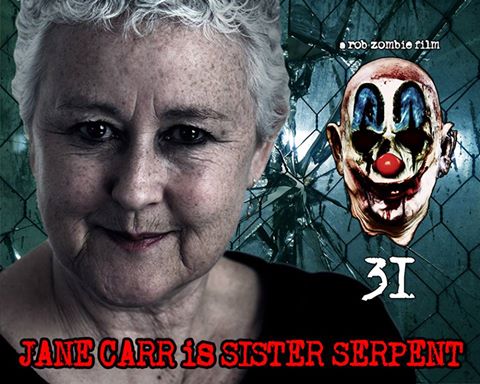 Joining Carr in the cast are Richard Brake as Doom-Head, Ginger Lynn as Cherry Bomb, Malcolm McDowell as Father Murder, and Judy Geeson as Sister Dragon.

31 just had its 10th day of production. For more info on the project, check out the official website.

Five people are kidnapped on the days leading up to Halloween and held hostage in a place called Murder World. While trapped, they must play a violent game called 31 where the mission is to survive 12 hours against a gang of evil clowns.