Yep, it’s exactly what you think it is. 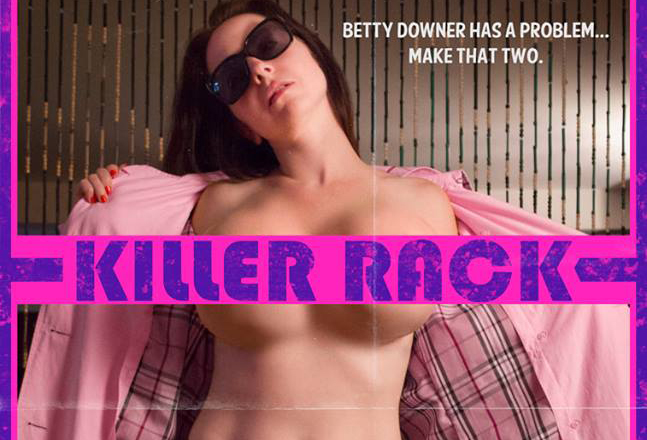 Raunchy film maker and author Gregory Lamberson (Slime City, Dry Bones) has done it again. He continues to solidify himself as the Tarantino(?) of horror with another shameless installment of overacting and chocolate syrup he calls Killer Rack…and no matter how tacky the premise is I can’t help but fall in love with this wacky bloody goodness. Maybe it’s just the man in me.

Here’s a quick break down (in case you can’t tell by the title):

“Betty Downer (Jessica Zwolak) is an unhappy woman who seeks to improve her romantic and professional life by getting breast implants from Dr. Cate Thulu (Debbie Rochon). Unfortunately for the people in Betty’s sphere, her new parts are actually flesh hungry monsters set on global domination.”

This move has got to be nothing short of hilarious. From the trailer it pretty much seems like a low budget play set to film. The roles seem largely overacted, the females actors all seem to be on one note (ditsy), and the male characters all seem to be a bunch of testosterone driven…well…boobs! (C’mon, I had to just once). And like a shlock seal of approval – we even have a quick trailer cameo by the one and only Lloyd Kaufman!

So, is it wrong that I find movies like these refreshing? In such a stifled, politically correct climate I feel we need a movie like this. It reminds us not to take ourselves so seriously. It remind us that beneath it all we’re still embarrassingly human, and a “ball in the crotch” will always be funny!

Killer Rack is aiming for film festivals this year. For more, visit the film’s currently on IndieGogo.

Check it out and tell us what you think by hitting us up in the comments below!