The main attractions are a no-show in the inferior sequel.

I haven’t been writing for this site for too long so let me tell you something. I consider myself to be a pretty fair grader. I try to find something positive to say about every movie I watch. It’s hard to get a movie made, especially outside the Hollywood system, and I hate dismissing movies outright.

Don’t see Monsters: Dark Continent. It’s a sequel to the 2010 British sci-fi hit Monsters, directed by Gareth Edwards. But while he went on to direct the Godzilla reboot (your mileage may vary how good that film was), the sequel was handled by Tom Green (but not the one you think). The script was written by Jay Basu.

10 years after Monsters, the Infected Zones have now started popping up all over the world. In the Middle East, an insurgency has been uprising and the army drafts a number of Americans to deal with the insurgency and also with the monsters that started showing up. The movie follows a group of soldiers as they travel to the Middle East and fight or whatever.

First things first. Despite being the title characters, there are virtually no monsters in this movie. They exist on the fringes of the story and don’t really add much to the story. The 2010 film used the monsters sparingly as did Godzilla but Tom Green and Jay Basu use them almost like they’re obligated. They show up and it’s cool but not nearly enough. I felt that they were more interested in telling a gritty war story about brothers in action. 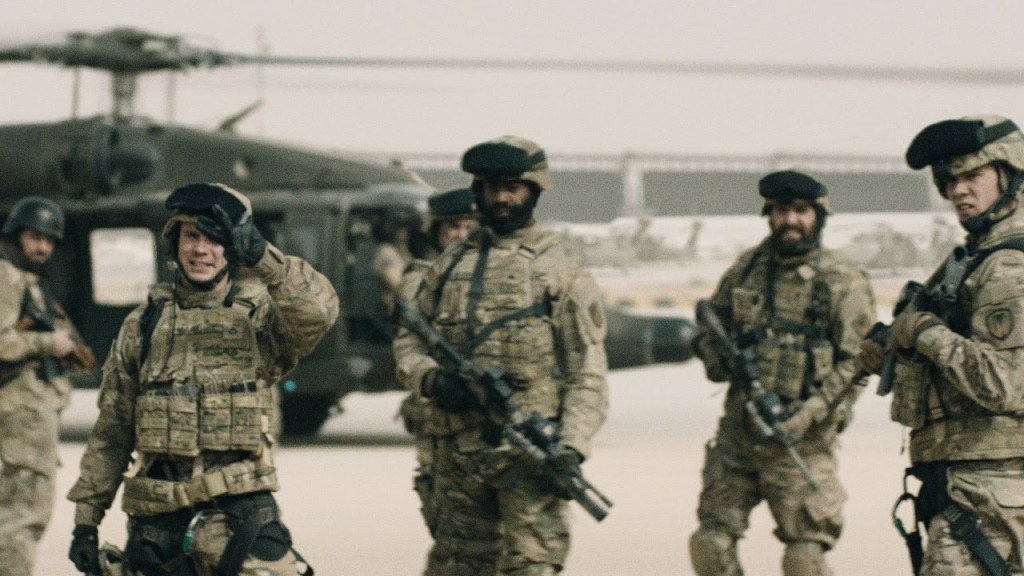 Monsters: Dark Continent is very much a macho movie. It wants to be a “Hurt Locker/Lone Survivor/Wold of Wall Street/Reservoir Dogs” movie (the filmmakers probably skipped Zero Dark Thirty for being too girly). This film, however, lacks any of the nuance, social critique or artistry of those films.  The characters are just ridiculous masculine stereotypes, the types of guys that dudebros think are so badass but really seem annoying and pathetic. There’s a lot of yelling, and jock philosophizing, together with imagery of women giving birth and hungry kids: This is what men do, they protect.

All that could be forgivable if the action scenes were at least entertaining. But here, the war scenes are sloppy and inconsistent. The film always looks over-saturated and grungy, taking its cues from previous American war movies. The acting is decent at best but I had no idea who each character was and what his purpose was in life. The film is lazy and half-cooked. The setup is ripe for metaphor–it’s low hanging fruit to be honest–but the movie doesn’t do anything with it. Everything about this movie is bland and redundant.

Monsters: Dark Continent is an embarrassing movie for those on the screen and those watching it. I could not find much positive to say about it. It’s 2 hours long, about a half hour longer than it has to be. It’s too self-serious to be goofy fun. And this is the worst crime: there are not enough monsters in a movie called Monsters: Dark Continent.