Things are heating up.

The ending of last week’s episode of iZombie, along with the previews for this episode, promised an eventful hour of television. I was skeptical that this would actually lead anywhere because I’ve been burned one too many times by this show already, but thankfully “Patriot Brains” lived up to its promise.

I can tell the show is gearing up for the end of the season, because this was the most exciting episode yet.

The episode begins right where the last ended – Liv sees Blaine approaching the elevator to Lowell’s building and sneaks past him before he notices her. Realizing that he killed Jerome from her vision, she ends up confronting Lowell about being on his meal plan. Lowell says he didn’t know the source of the brains, but Liv doesn’t believe him.

I wouldn’t either, considering that he should be getting visions every time he sees Blaine – and we even meet a super rich “client” of Blaine’s who mentions having constant visions of murdered homeless kids – but somehow, this turns out to be the truth. Liv tells Lowell it’s over, but when he shows up at her door, wracked by guilt, she instantly forgives him.

Meanwhile, of course, the case of the week is going on. The case, as usual, is completely irrelevant, though I did find it a little more interesting than usual. It involves a veteran with PTSD who’s murdered after a custody battle. I suppose you could make the case that there’s somewhat of a parallel between Liv and Blaine fighting over Lowell. It’s a stretch, but it does conjure the image of Lowell as a lost little girl, which is adorable and also hilarious.

What I call the “personality of the week”, though, is much more fitting for Liv’s story here. When Lowell explains how Blaine’s business works, she decides he has to die. Lowell sets up a barbecue with the man (Blaine’s a music geek, apparently, and has been bugging him about it). Liv prepares to kill him from a rooftop with a sniper rifle (a new skill she has with the soldier’s brains – see? relevant!).

Liv goes into a voice-over monologue debating the oath she took as a doctor, saying she sees killing Blaine as “killing a virus”. Ultimately, though, she can’t go through with it. This dovetails nicely with the soldier’s experiences. Earlier, she explains to Clive how he rationalizes his killing by keeping in mind the people’s he’s saved. But, like I said, he has PTSD – the man was wracked with guilt. You only go to such lengths at rationalization, after all, if something doesn’t sit right with you.

So, in the climactic scene, is it Liv deciding not to go through with it, or is it the sniper’s? I say the clear answer is both. And that’s what I call a good use of the weekly personality: it affects the plot, and it affects Liv’s story.

Major’s story is more of the same. He’s inching ever closer to discovering zombies and Blaine’s operation. The Candyman tries to take him out, but the gun he bought last episode was majorly useful. Major calls Clive, telling him he killed an intruder, but of course the Candyman wasn’t there anymore (’cause he’s already dead! Man, I’m killing it over here). 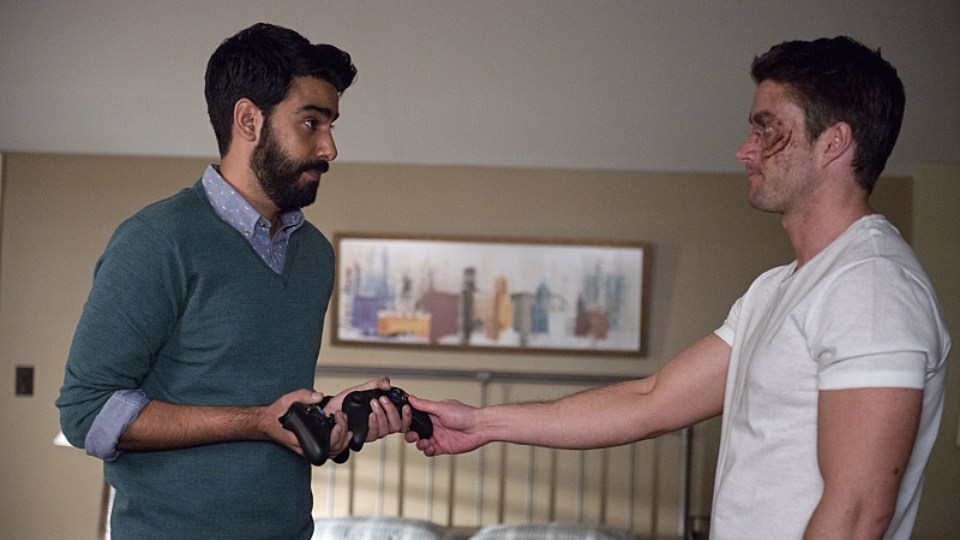 If you had told me when this show started that Major would get interesting, and then he would be beaten up so often I’d actually start getting bored of him again – actually, I might have believed you, but still, this has been an unexpected ride. I’ve been ready for Major to figure things out for about 3 episodes now, but it was always only going to happen towards the end of the season. I could see it happening next episode, but it probably will only be in the penultimate or final one. I say there’s a 50/50 chance he turns into a zombie himself.

Of course, this episode ended with yet another bang. That was a deliciously shocking ending. I’m so ready for Liv’s angst levels to skyrocket even while she and Blaine prepare for war.

In the end, besides the always-tedious procedural structure, the only serious recurring complaint I’ve had about this show in general has been the pacing. Now that we’re approaching the end of the season, that’s becoming less of a problem. So I’m excited! Are you guys excited?