Should this found footage have stayed lost?

Oren Peli’s success story with Paranormal Activity is one for the history books. It was the right film at the right time, went on to become a huge sensation and the start of a profitable franchise. But it seems lightning cannot strike twice. Peli’s next film would be Area 51, which began production in 2009. After years of rewrites, test screenings, reedits and reshoots, the film is finally being released exclusively to Alamo Drafthouse theaters and VOD platforms.

The thing is, few films can come out of 6 years of retooling unscathed. And unfortunately Area 51 is not one of them. Peli’s film is not bad but it suffers from the “Seinfeld is Unfunny” curse–meaning, even if it was made before the found footage trend took off, it suffers in comparison to the trend’s better entries. The film stars Reid Warner, Darrin Bragg, Jelena Nik and Ben Rovner.

Reid, Darrin and Ben (yes, all the actors keep their real names), are three friends who plan a trip to Area 51 after Reid experiences something weird at a party–a strange light, missing time and he thinks it’s connected to the Nevada base. After breaking into a house to steal a badge they get into the base with the help of Jelena, whose father worked there before becoming a conspiracy theorist himself. But once there, the gang is not prepared for the horror within.

Area 51 starts off pretty well. The family and friends of the three boys recount how normal they were before Reid became obsessed with Area 51. Then the boys are shown planning their trip, scoping out the area, interviewing other alien-believers. While the set up is too long–it takes about half the movie for them to even get inside–it’s at least interesting. I especially liked the part where they talk to the alien-believers. I wondered if these people were real or were actors. If the former, it’s interesting to hear what they have to say. 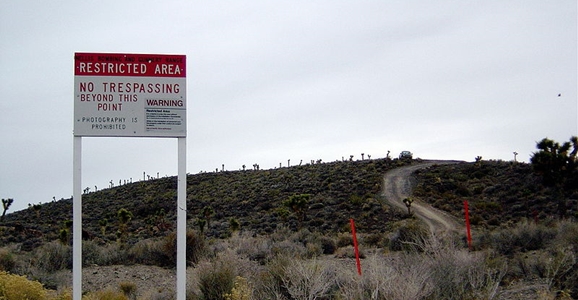 Once they get into the base, however, the movie loses most of its steam. Because the film is found footage and shot handheld, you can’t really see what’s going on. Less is usually more when it comes to horror in general. But after an hour of setup, I felt like I had lost interest in these guys and their plans. The effects are not that great and nothing that hasn’t really been seen before (people being dragged away–let’s put that away for a few years, ok?). The film also falls into a trap where all the dialogue is people yelling out the other characters’ names or screaming WHAT IS GOING ON? WHERE ARE YOU? for twenty minutes.

The three boys are not believable as friends, despite their best efforts. For one thing, they call each other “dude” every two minutes and go to strip clubs and get wasted. We get it, they’re straight bros. Reid, Darrin and Ben aren’t so much characters as plot devices–the believer, along-for-the-ride guy and the skeptic. Jelena is decent but she seems shoe-horned in to get a girl in the movie.

The camerawork and the editing are both pretty sloppy. I don’t mind the handheld camera thing but it should be used to some effect, not just to save money. I admit they tried to justify the constant filming by noting that people would want to see the footage. Maybe that’s true but I doubt anyone thinks that this movie is real. I mean, why not just make this movie flow better with a more consistent style?

Area 51 survived a long production process but the results aren’t as exciting as they could be. The movie is short and watchable but it’s just not very memorable. With few scares, thin characters and a set-up that goes on too long, it’s hard for me to recommend this to anyone but conspiracy theorists or major Oren Peli fans.