The teaser trailer to the Starz original t.v. series Ash vs. Evil Dead is out and boy is it a tease, can anyone say “foreplay”? It starts with a puddle of blood, drip, drip, drip – it leads us to the butt of a chainsaw that’s seen it’s fair share of carnage. Close up on the long blades caked with the remains of victims past and then we hear it, that gritty voice that promises an ass kicking in the not to distant future “Ash is back baby”,  Ash revs the chainsaw to life and it roars like a 64 Shelby Cobra. I’ve got chills folks, and they’re multiplying.

While it shows a bit more than the incredible bare bones first teaser – it has yet to really show us any actual footage from the show. That’s okay – because I can never get tired of seeing that old chainsaw rev up back to life. 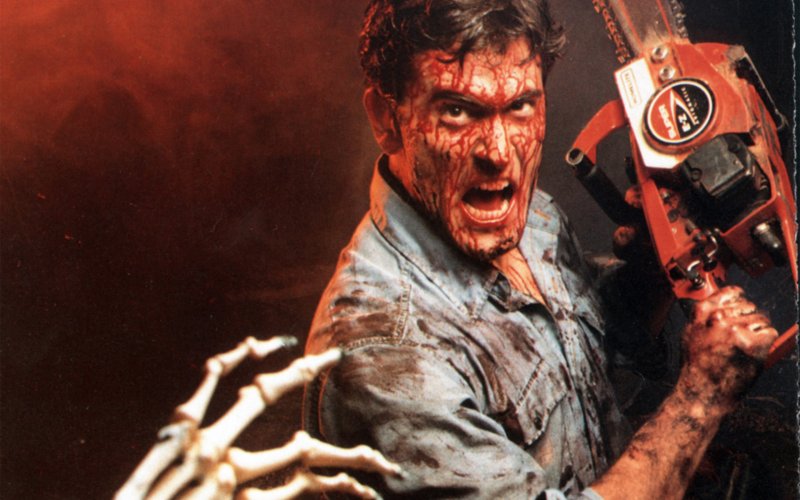 In case you have no idea what I’m barking about (Oof if you haven’t) – Ashley J. Williams is the iconic cult figure embodied by Bruce Campbell and created by Sam Raimi in the cult classic Evil Dead. Starz has now picked the show up as a sequel series that is currently in production in the wildly beautiful country of New Zealand (Think Lord of the Rings).  I don’t usually make predictions but this trailer’s pretty hard to ignore and I’m willing to bet this series will attract new and old fans alike.

“In the series, Campbell will be reprising his role as Ash, the stock boy, aging Lothario and chainsaw-handed monster hunter who has spent the last 30 years avoiding responsibility, maturity and the terrors of the Evil Dead.  When a deadly plague threatens to destroy all of mankind, Ash is finally forced to face his demons –personal and literal.  Destiny, it turns out, has no plans to release the unlikely hero from its “Evil” grip.”