A.K.A. Internet Trolling: The Movie

Let’s play a game. Pick any sort of offensive word you want. Grab a bottle of cheap tequila. Then watch The Human Centipede 3 (Final Sequence) and take a shot every time your chosen word is said. By the end of this 102-minute catastrophe, you’ll be so drunk you’ll have to go to the hospital. Tom Six, the writer/director infamous for bringing mouth to asshole hijinks to the big screen, fills his “screenplay” with the most “shocking” lines he can “think” of, hoping his “audience” will “howl with laughter” or be “shocked.” In his attempt to make an over-the-top Bad Movie, he forgot the golden rule: you can’t attempt to make an over-the-top Bad Movie.

The Human Centipede 3 follows a sadistic prison warden William Boss (Dieter Laser) who struggles to keep his unruly inmates under control at George H.W. Bush Penitentiary (probably the only funny joke in this movie). His assistant Dwight Butler (Laurence R. Harvey) is obsessed with Tom Six’s first two Human Centipede movies and keeps trying to get Boss to try the centipede as a way to control them. I imagine Tom Six had a huge erection off his own meta cleverness. When Boss finally agrees, he decides the centipede will be a big crime deterrent and tries to convince Governor Hughes (Eric Roberts, brother of Academy Award winner and megastar Julia Roberts) that this is the best way to operate correctional facilities.

I love bad movies as much as the next person. I proudly own a copy of Showgirls, the Citizen Kane of bad movies. But actively pursuing the “so bad it’s good” label is bad movie Kryptonite. (That’s why the SyFy TV movies are never as good as their titles.)

The Human Centipede 3 is also just really dull. Like mind-meltingly, soul-crushingly, dick-shrinkingly boring. The movie has such a sluggish pace that all the scenes run together and feel like one looooong monologue of Bill Boss ranting and raving, saying things like “my leadership balls are atom bombs!” Admittedly, I’d put that motivational poster on the wall of my office.

By time Bill Boss agrees to try the centipede, I’d aged 20 years and forgotten what movie I was watching. If this movie had a better pace and an actual sense of humor, I might have enjoyed the goofiness. But it takes its own meta-irony so seriously. The whole movie feels like an inside joke that Tom Six has with himself.

If I were being generous, I could make a point that all three Human Centipede are performance art commentaries on how critics are all snobs or whatever. The “trilogy” does feel like major Internet trolling, trying to get people angry for the sake of it. And as my fellow Horror Film Central writer Derek noted earlier here, these movies are unquestionably themselves–Tom Six promised movies about people being sewn ass to mouth and that’s exactly what they are. The lack of bullshit sociopolitical undercurrents is refreshing. But as much as I admire go-for-broke absurdity, I also want to be entertained. This movie is almost anti-entertainment. 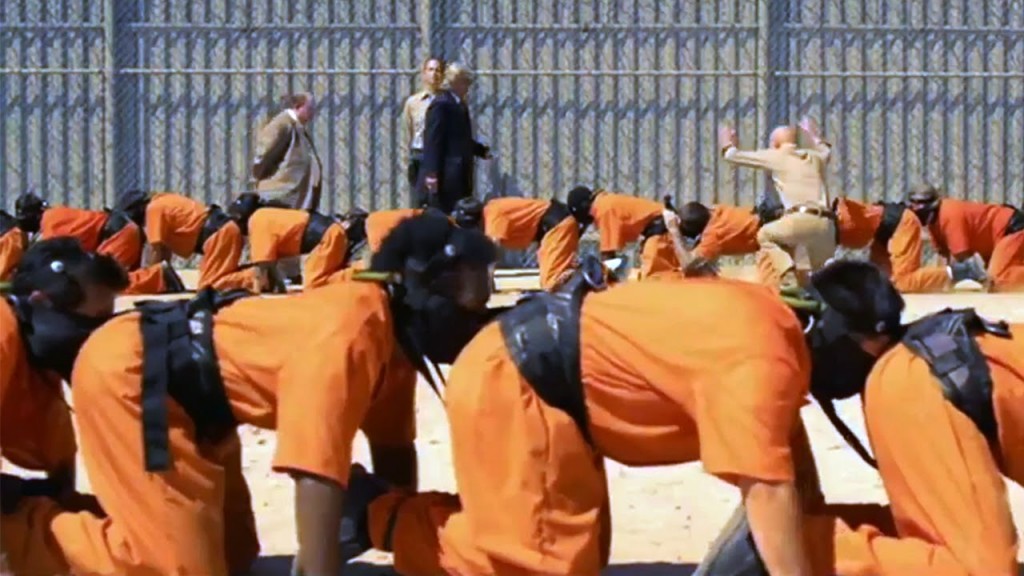 This movie is pretty graphic, featuring bizarre but too over-the-top to be upsetting scenes of violence and rape (the word I chose for my own “Human Centipede drinking game”). I mean, there’s a scene that features a bunch of inmates shouting “death rape! death rape!” which I think is the kind of thing that Tom Six hopes will enrage people. But doesn’t he know that the people who will get enraged by this stuff are highly unlikely to even see it?

The Human Centipede 3 (Final Sequence) is ugly-looking, and not in an expressive way. It just looks sloppy and lazy. Dieter Laser’s incessant screaming and loud orgasms were more upsetting than any other content in the movie. Laurence R. Harvey is annoying as hell. This movie is annoying as hell.

Maybe there’s a group of body horror fans who will get a kick out of this movie. The inside jokes, the meta plot, the brutal absurdity–maybe there’s an audience for it. But this movie made me want to pluck out my eyeballs Kill Bill Vol. 2 style. Thank God, it’s the “final sequence” because I’d hate to see Tom Six try to top himself without learning how to make a movie like this actually entertaining.