Here’s a good story to tell around the campfire.

It starts with a man. Let’s call him John. John lives in a house in the suburbs, and commutes to the city every morning for work. One such morning starts out like any other: he showers, gets dressed, and eats breakfast with his wife. On the radio is an ominous story, something about an axe-murderer who’s escaped from prison. But John’s not paying attention, because obviously there’s no chance this will affect him. He’s just worried about the shakeup at work.

As he leaves the house, he kisses his wife and says, “I’ll be back tonight.”

When he gets to work, he moves in to his new office, which he’s been given because the previous occupant died. Actually, it’s a pretty gruesome story. Her husband charged into the office one day and strangled her to death, just like that. The weird thing is, they had a completely happy marriage, and the husband can’t remember doing it, or why. He says he was overcome by a force, like he was possessed. Now he’s going to prison, and John is getting the office instead.

Once he’s settled in, he gets to work. But after a few minutes, his computer starts to go haywire, glitching crazily: gore sites pop up out of nowhere, and loud static sprays from the speakers. At the same time, the lights flicker. The man starts to freak out, but he eventually forces his computer to reset, and the lights go back to normal. He runs an antivirus scan, which seems to solve the problem.

He takes a long lunch, and ends up wandering into a pawnshop. He finds an old looking book with a twisted face on the cover. Curious, he opens it – it’s in a strange language he doesn’t recognize. He starts to read it aloud from it: “Kanda… es-trada…” something like that. He gives up and shrugs.

John starts to leave to head back to work, but the shop keeper stops him and shows him a puzzle box. John examines it, but is confused. “How does it work?” he asks.

So he takes it back to work and ends up trying to solve the box all day instead of working. Eventually, the pieces seem to fall into place, almost as if the box is solving itself. It snaps open, revealing nothing inside.

John waits a moment, as though expecting something. But nothing happens. 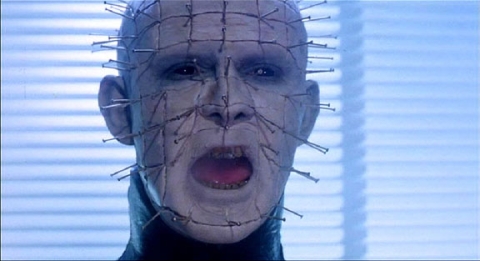 When he gets home, he has a romantic, candlelit dinner with his wife. They retire to the bedroom, where they have sex and fall asleep. He’s survived another day.